Okay remember my entry about how the drama in tall girls about who was really "tall"? I think I want to make this a genre somehow... niche internet groups, and what they fight about. because I love them. I love all of them, the weirdness, the picky fighting, the stuff you can't predict.

Today's feature is about rock painting. you all know I paint rocks right? Kindness rocks - you paint an inspiring word or cute drawing to make someone's day better, then leave it in a park or on a bench with a hashtag on the back. Maybe someone finds it and posts it in the local facebook group to say thanks. Maybe you never see your rock again. Whatever.

Our group is a kind and harmonious place. mostly. I mean, we're all about being kind and uplifting, what could go wrong?

Well a few times last year we'd have random people, usually newbies, post complaints that their rocks were not being posted. They'd paint a rock, hide it in a park, and never see it again. Rather than let go, they made long-winded indignant statements about how dare people find rocks and never join the group to post a photo.

But get this, we finally had to ban a lady because she wouldn't relax about her rocks going missing! She kept bugging us to make a group RULE that members HAD TO POST ROCKS THEY FOUND. she was convinced that her rocks (that were... again... being left in random parks) were being found by group members (10000 group members in a city of 500000 people you do the math) and those group members were vindictive and mean. her solution: the facebook group admins should take her side and put the hammer down and make hardcore requirements that all rocks must be posted. the group admins had the power to force the general population to post where her rocks were going! but instead, us group admins got really sick of telling her to relax. she couldn't post anything nice, it was a lost cause. we finally removed her from the group. She posted a mega-rant to her own facebook page about how "people blame trump for divisiveness but he can't be blamed for all the hate! I'm in this rock painting group..."

whatever. that was a few months ago.

what inspired this post? well, someone found this rock in a park.

I leave this here as a tribute. a tribute, and symbol, of how wonderful people and the internet are. If you wanted to make up stories like this you would not be able to. it can only come from facebook. 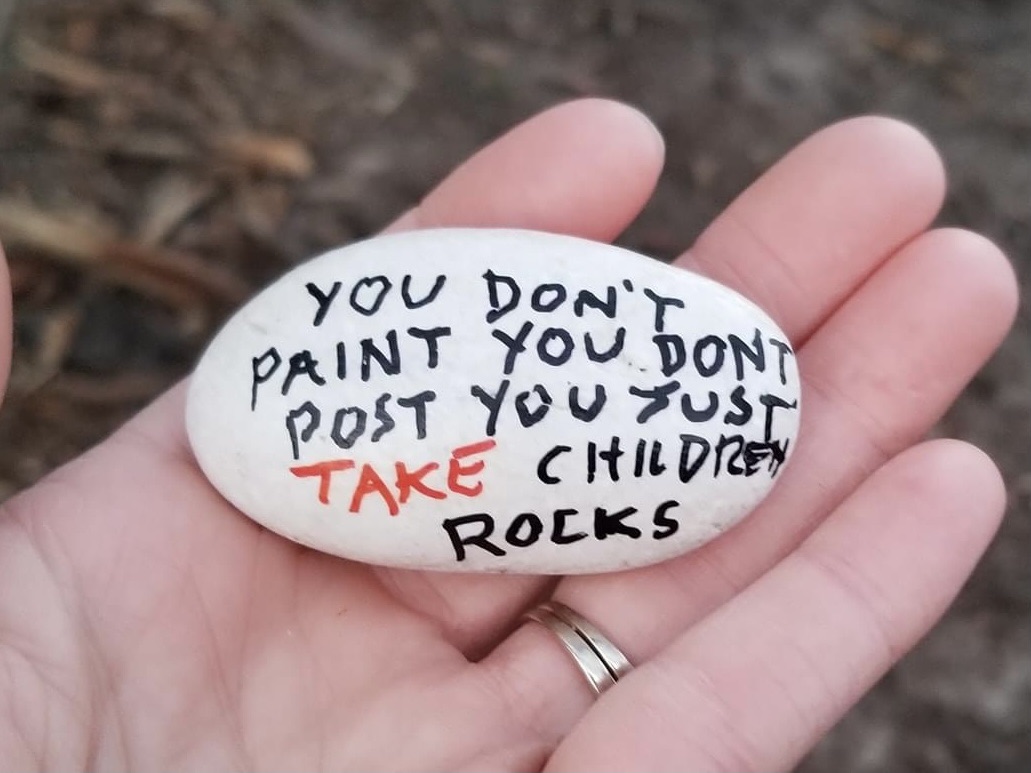