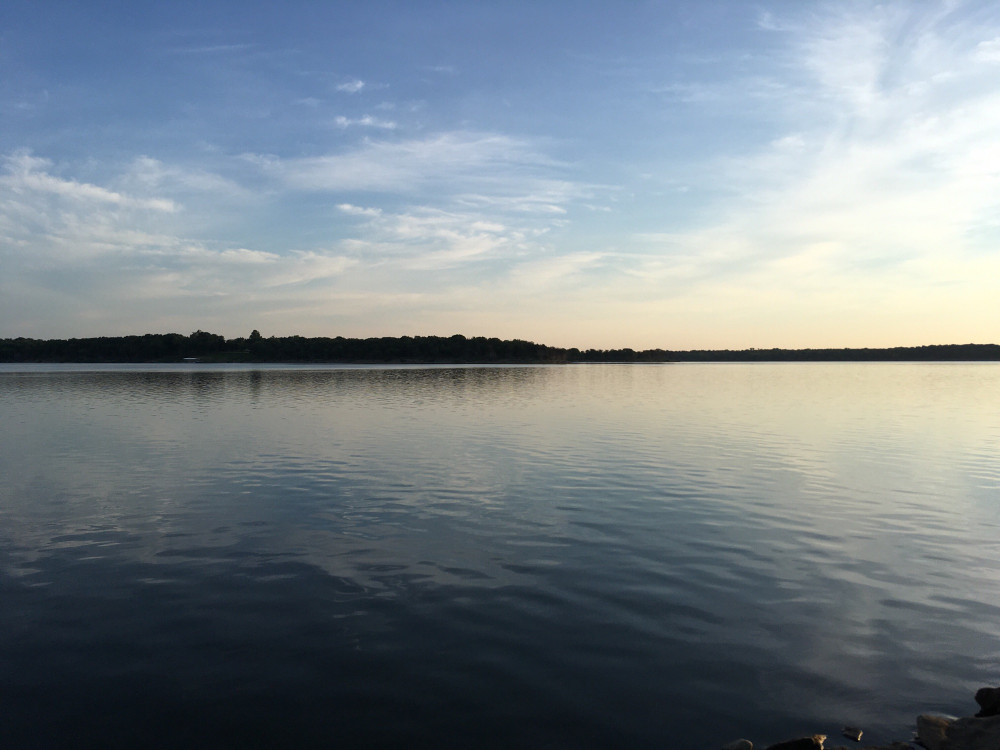 Last week we traveled. Finally a summer vacation, after a summer of not doing anything. We needed it. My kids looked alive swimming out in the lake while the sun set, vanishing underwater to find rocks and laughing at what they found, perfect sister harmony. Their eyes had been looking dead lately. Trapped in an inside world between the upstairs TV and downstairs TV, they had stopped even wanting to go on walks with me, didn't get the initiative to do their own arts and crafts unless dragged into it. Josie kept sleeping later and later. We drove them two hours away and renewed their spirits.

It was my sister's prompting that made it happen. we'd talked forever about renting a cabin at a state park together. So I searched around and found one. I'd never been to Pomona but I've been to lots of state parks. I knew we just needed a lake, a swimming beach, a nature trail, a place to sleep. She's not ready to do tents with her little kids, and for a real vacation a cabin is a lot more relaxing anyway, so that's what we did.

We arrived on a Thursday. Entered the cabin with chlorox wipes in hand to get any high-use surfaces first, then unpacked and went down to swim. We sat outside and my little nephew, almost three, kept wanting to drag us down this little rock trail through the trees towards the lake. We finally gave in and stumbled our way through it, maybe 100 feet of serious ankle-rolling danger for us, but great for him! It ended at a fantastic lake spot where we could sit on big rocks and watch the sunset. There were tiny wolf spiders who'd run away from us fast but kept running along other rocks, and later on we saw bats flying around in the dusk. Between them the mosquitoes were REALLY light, which is weird for Kansas this time of year. I was thankful to whoever was putting in that work.

Friday we woke up and my sister, my niece, Josie and I all went to find a nature trail. We saw a family of wild turkeys, an ornate box turtle, lots of butterflies. It was advertised to be a half mile. By the time we hit the end my niece was pretty done. I can't remember the exact schedule friday... maybe we swam twice, once in the afternoon while my nephew napped, and again in the evening so he could come down with us? We had fajitas for dinner, played some rounds of SEQUENCE, built a campfire outside and made s'mores.

Saturday morning I got ambitious, I'd been the first one awake the previous day, so this time I had running clothes sort of together where I could find them and I went for a run. I wanted to find the 1 mile trail. I didn't quite make it... after 20 minutes of running I knew I'd gone too far on the roads and I started to head back. At one point I saw an entry into the middle of the trail, saw where it split off to what might have been that west entry point I'd been trying to find, but I went east instead, following the trail back to its main entrance by the park gate. I should have just started there, find the easy obvious entry point instead of trying to arrange my jog in a nice loop that ends in a trail segment. Next time. I'd been gone for an hour and wanted to get back so nobody would think I was lost. It'd be hard to get lost in a Kansas state park, they're not huge. Even when we've felt lost on trails our joke is "you're never lost when you can still hear a lawnmower" - it's that kind of space.

Being the first in the morning to take a nature trail really puts you on spider duty, so I spent the better part of a mile dodging orb weavers and garden spiders and anybody else who'd decided to build a web at eye level across the mowed path. I knew these webs aren't built to last, so i'd carefully find a high attach point and break it when I had to cross. I think at least 2-3 times I didn't see it and just ran right through a web, so I had that spider webby feeling until I got back, but I was so sweaty the spider webs were just one more thing. The family was up and having breakfast just as I got back so I urged us all to have a morning swim. We got to the lake and I went under water. The girls wore their life jackets to see how far out they could go, there was a barrier where the swimmers were supposed to stop going out, and I went with them to see how deep it was out there. I never found the bottom so I'm not sure. But at least 30 feet of the beach was shallow enough that Olive could touch, so that's where they stayed most of the time, just splashing and doing flips, skipping rocks and picking up mud. Kansas lakes aren't clear at all. We don't care.

With that, it was time to head home. Three days, two nights. Maybe next year we'll extend.

Our cabin was split in thirds: a bedroom, a kitchen, and a kids bedroom with four bunk beds. Perfect for two families with four kids between them! Marc and I slept in on a foldout futon in the living area, and gave my sister and her husband the bedroom since their kids are younger and might end up in bed with them, but all the kids slept great.

The first day we'd walked to the lake but it was a bit of a hike for the little kids, so the other times we drove. My nephew loved being squeezed into the car with his sister and cousins, it's such a novelty for a two-year-old to NOT be 5-point strapped into a huge toddler seat, but we weren't even driving a mile so we didn't care. The last morning he got my attention and said "thank you for letting me ride in your car to the lake!" in his cutest little words that I could just barely decode... his pronunciation is rough, but his enthusiasm is genuine. during this moment he said nothing to his dad who'd spent two hours making him laugh while they skipped rocks together. the kid will be three in November and it was adorably surprising to see how many random words he knew. a year ago he was a BABY who could say, like... ball? mama? Now he tells us everything in phrases, like "one more time", or "I want a turn with the water squirter". We introduced him to cheese balls!

I'm a little sunburned. I didn't take many photos, because why stop for those?
Collapse