Back in March my ten year old daughter and I had a lot of fun playing a Monopoly game we'd borrowed from friends in a quarantine game swap, so I figured we might buy our own. I immediately noticed that there is now a MS MONOPOLY... a monopoly game celebrating women's achievements! 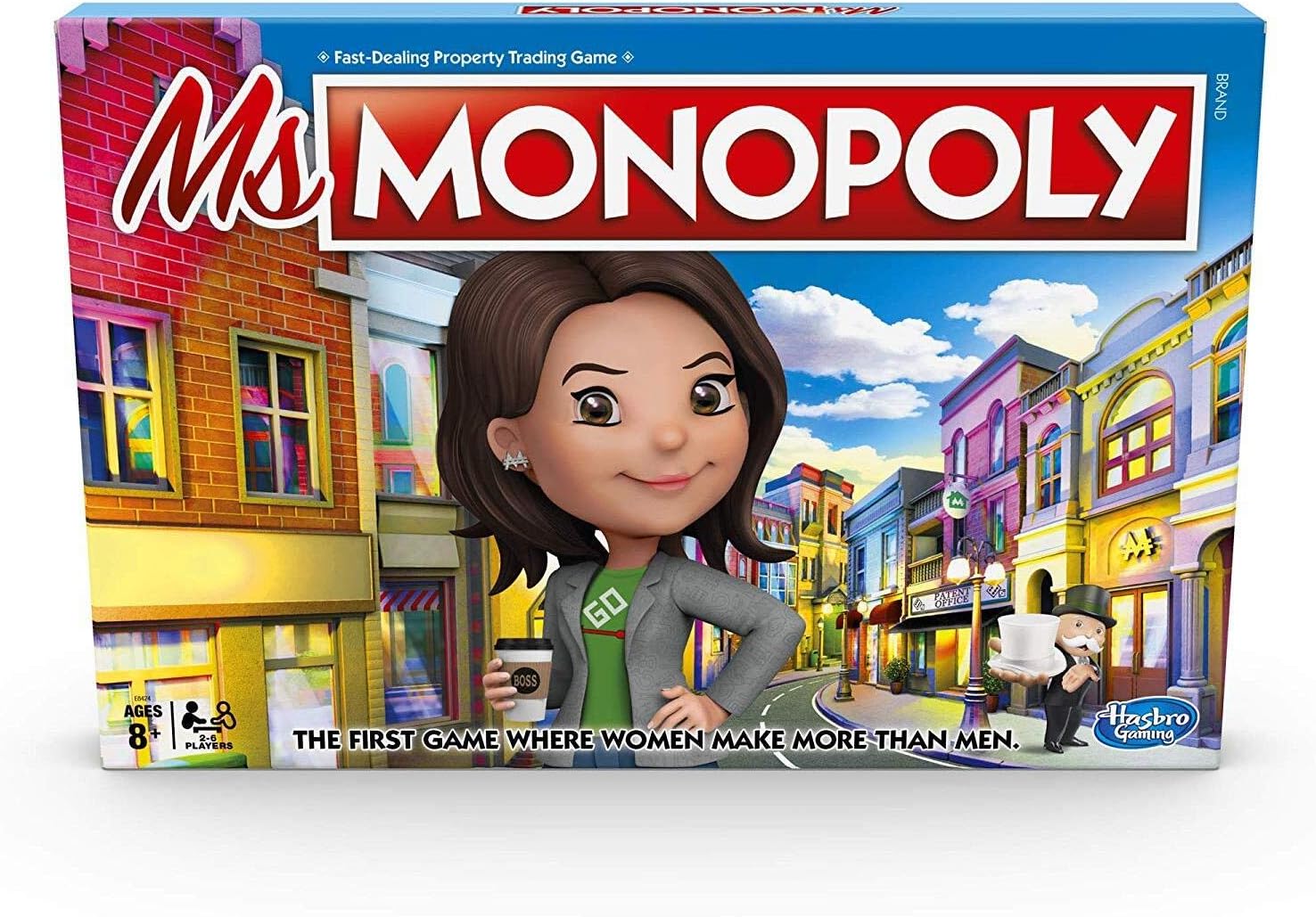 I also noticed that the reviews were absolutely terrible, and it was clearanced out everywhere. Hey that's good news for me, I can get monopoly for $10!

Unfortunately it really is terrible. That's coming from a hardcore feminist who loves women's achievements. I went searching for any information about the development of the game but couldn't find it. Who'd they run this past? Why didn't they throw the concept out to anybody, and let real life feminists talk about how they'd redesign the game?

- Properties are named after products invented by women. This was the idea I thought had the most potential, but there's no incentive to read the back of the cards to learn the backstory, so it misses the boat a little bit.

Metaphor alert: Since you need to see the rent costs on the front of the cards, the inspiring names and stories on the other side spend the whole game face down.

They are all European or American. The card for the Q Flex, presented on Shark Tank by a 13 year old girl in 2014, doesn't quite hold up to Maria Telkes' solar heating invention, but I get that they're trying to seem modern. maybe? "Modern Shapewear" is a card, with the back telling the story of Sara Blakely the founder of Spanx. With a heavy sigh, I had to explain to my ten year old what shapewear is. "Talk about a confidence boost!" adds the game.

- Female players get more money just for being female. They start the game with an extra $400 and earn $240 every time they pass go instead of just $200 if you're a male. That's the prime source of the bad reviews - instant and offensive inequality. After decades of feminists explaining that we are not asking for handouts but equal opportunities for girls and transparency for wage earners, it's pretty sad that somebody thinks feminism is still about women getting free stuff. That's usually a red flag that someone listened to what anti-feminists had to say about the movement, then blocked out everything else.

- There are game pieces like a white top hat because ladies have our own style, and a wristwatch "because it's time for a change!", and a barbell because we love hitting the gym to relax.

- There are no houses/hotels, instead just "headquarters" and you can only buy one per property. So it's dumbed down a little but this might be typical of other kid-targeted monopoly games.

- Community chest and chance cards are, um, girlier? But not educational. Things like "find yourself on an awkward date! advanced to FIRE ESCAPE" and "You see a new superhero movie with a female lead, collect $50!"

Darn. Monopoly is a fun game for us and a good lesson in how rich get richer, it's a shame they couldn't tie into more interesting ideas for kids.

Here's what I WOULD have done:

I would have made the community chest/chance cards feature women because those are moments in the game you actually spend reading.

Instead of inventors (which I think is always a loose word) I would have added women scientists, leaders, entrepreneurs like Madame CJ Walker.

I would have tied in history... when were women legally allowed to vote, earn property, run businesses? Bad luck cards shouldn't just be a money charge, but a "set back" like we've actually had. Lose a turn, or can't buy property until you pass go again.
Collapse