For my birthday I asked my lj friends to ask me questions to inspire future entries.

dadi said I should post about the ferrets, which is a good idea. I'd post about them more, but a pet post needs a photo, right? And ferrets are impossible to photograph! But we managed to snag one, finally: 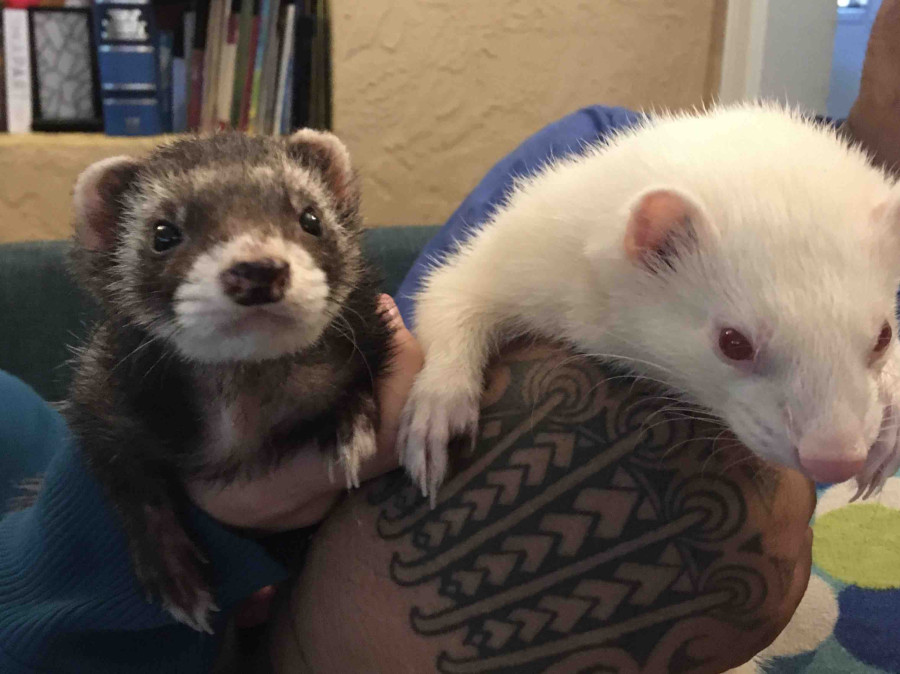 Frankie is the brown one, Watson is white.

Why did you get a ferret?
My oldest daughter Josie became OBSESSED with ferrets - drawing them, reading about them, telling us about endangered wild ferrets, writing down care sheet instructions and plans. We tried to talk her down for well over a year. Her room became a ferret gallery. I think Marc has secretly always liked ferrets. I was skeptical. We have a dog. Dogs are the perfect pets, clearly designed by our creator to be our lifemates, they love us unconditionally, are the right size to be obvious, poop outside, and listen to some commands.

In 2019, one of her BFFs got a ferret. That family is a lot more pet-impulsive than we are, they've had lizards, fish, hermit crabs, hamsters, in addition to multiple dogs. But Josie was SO jealous, and the friend's mom said she loved the ferret, it was like a little designer dog except SMALLER!

Then Marc's friends loved her ferret drawings so he made one into a screenprint for a t-shirt, and let them all bring shirts and donate to her cause of getting a ferret. Yes, he helped her launch a fundraiser. Well then we can't exactly tell people that we're going drinking with the money.

The money was enough to get us a craigslist cage. We surfed craigslist for a ferret, and one came up in south Wichita. Marc and Josie treked out to meet another family that was apparently pet-crazy, a house full of dogs, cats, exotic birds, and ferrets. That is where we got Frankie.

Why did you get another ferret?
Josie asked to take Frankie over to her best friend's house for a ferret playdate. Her friend's ferret was Elliot. Frankie and Elliot immediately fell in love, spent the whole day frolicking and the whole night sleeping together in a pile.

Well, we felt bad that Frankie was alone, and we'd read plenty about how ferrets need a squad... or a "business", as a group of Ferrets is called. So this time we went on the humane society waitlist for ferrets, and one day Marc got the email and ran to adopt Watson.

Frankie and Watson immediately tried to kill each other and are mortal enemies. Still. Yes. Dammit.

Good thing we got a two-story divided cage.

Are ferrets like guinea pigs?
We had guinea pigs before. I thought maybe they'd be like that... but they are not. They don't eat vegetables, they need meat. Raw egg yolks are a good treat.

They also insist on exploring the entire house, top to bottom, every day. This is even harder for us since Frankie and Watson try to tear each other to shreds, so only one ferret can be out at a time. You let a ferret out and they make a run for it, sniffing every corner, bounding up the stairs, running under the couch on one side only to shoot out the other side. Sometimes you find them sleeping in a ball in Josie's drawer. Sometimes you're unloading the dishwasher and there's a ferret, staring up at you like it has something very pressing to ask.

Are they litter trained?
Kind of. We have litter boxes in their cages, one downstairs and one in the upstairs bathroom. I'm also happy we have hard floors.

Do they like people?
I'm not sure. I don't think so. They follow me around a lot, especially Watson. Watson tries to attack me though. I think. I'm not actually sure what Watson is doing, ever. Frankie is more likely to win the weirdo ferret staring contest, Watson is more likely to start jumping around like he's war dancing, then I knock him over and he wrestles with my hand like a kitten, all teeth and claws. But then he escapes, and jumps around, attacks the fan duster, a shirt on the floor, his own tail, then he goes totally flat like he's hiding, then he rolls over and hides under the dresser. Then he runs back out again and jumps at me, but forgets what he's doing and stops to scratch an itch on his side. Then he just wanders off. This weirdness happens to me 5-10 times a week... attack ferret springs out of nowhere and I decide to either engage and play, or just grab him and he chills out in my arms as he's carried back to his cage.

Then he either goes to sleep, or gets pissed off about the cage. If he's mad he flips over his food and water bowls then slams them noisily around until we let him out again.

This is definitely not something guinea pigs would do.

Do they go to the vet?
Yes, they get vaccines, including a rabies shot, and an annual checkup. It's about $100 a year.

Plus $200 a year for Frankie's hormone replacement therapy. Yes you read that right. I can't say it with a straight face. I told Josie we could buy a lot of new ferrets for that... but whatever. After we'd had her for a while she was losing hair. We went to the vet who said she had a life-threatening adrenal gland disorder and needed a yearly Suprelorin implant to prevent hair loss, swelling, loss of appetite and other terrible things.

They came to us spayed (Frankie), neutered (Watson), with scent glands removed. That last bit about the scent glands is the scariest thing to me, because they smell terrible. I can't imagine what they'd smell like at full strength.

If they're carnivorous hunters, can they hunt mice?
That was an internet rumor, but they've 100% failed at our house so far.

They're running around underfoot, aren't you worried about stepping on one?
A little bit, but they're sturdy. And they're fast enough they kind of get out of the way. We probably shuffle around the house these days without even thinking about it. Both Marc and I have been doing normal things, and kicked a ferret straight in the face. They look up at you like you're the biggest asshole, and you apologize and say "WHY ARE YOU HERE?" and they keep staring until you reach down and give them a head scratch. Then they run off to do something weird.

Do they play with toys?
They like to take things and hide them, especially squishy things. Every time I take out the bottom drawer of Josie's dresser I find a weird ferret stash of nerf bullets, bouncy balls, hair ties and who knows what else. They clearly have a plan for all this stuff.
Collapse