For my birthday I asked my lj friends to ask me questions to inspire future entries. There's still room for more if you want to visit that entry.

sherlock999 asked me about where I live in Kansas. Wichita! Here, I'll write about it. 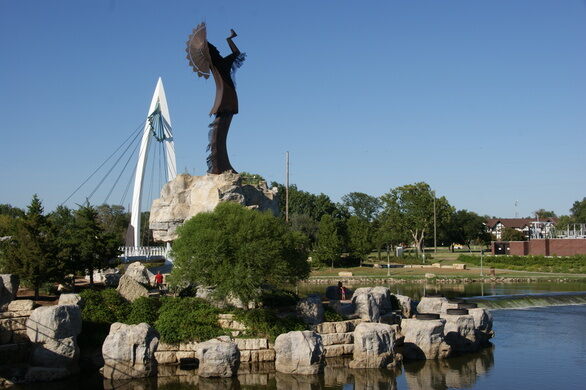 Keeper of the Plains

Population: 400000, with another 100000 in the rest of the county in suburbs like Maize, Andover, Derby, etc. We live in Wichita proper, in an old house a few miles out from the center of the city.

I've told people that Wichita is the smallest city I could comfortably live in. It's big enough that there are things to do and people to form groups with. We are missing some things. There is no waffle house, in and out burger, urban outfitters, or IKEA. We JUST got a Costco like three years ago or something.

Wichita has an east and west side, with a lot of talk among people about who's who and why you'd go to the "other side" of town for anything. The stores are kind of mirrored - each side of town has a sam's club, gap, michael's, bed bath and beyond... we have two of everything.

We have this weird city Eastborough right in the middle of Wichita. It's basically a subdivision, with really nice big old houses. Why they decided to be their own city I have no idea. They have their own police force that is funded by giving the rest of us speeding tickets.

My Dad lived in Wichita for a few years, but now lives outside KC, and he says his favorite thing about Wichita was the general sense of what's going on, and he's right. Whether it's a flaming lips concert or broadway touring group or a chili festival, everybody knows what's going on. We are small enough to maintain a hive-mind like osmosis of the weekend's activities.

I think this contributes to a healthy level of community pride that I don't see in other cities. We have a Wichita flag that's flown and painted EVERYWHERE. We have replica statues of our Keeper of the Plains Indian monument in different designs all over the city. We've got a fantastic group that's adding murals all over town. Our latest mural is the largest in North America, celebrating Latino and African American communities and painted on a grain elevator.

Wichita is the largest city in Kansas. Other notable cities are:

1) Kansas City, which is actually mostly in Missouri, and so spread out its identities keep to themselves. Olathe, Shawnee, Lenexa are all in our top 10 population cities but to Kansas outsiders they might as well be Kansas City.

2) Lawrence, an artsy college town that's nice to visit but who'd want to live there. I think it's all talk.

3) Topeka, the state capital that shuts down every weekend when everybody drives back to their cooler houses in Lawrence.

4) A wide assortment of 30-50K places like Manhattan, Emporia, Salina that offer a little character but nothing huge.

Wichita was settled shortly after the civil war. Before that, we thought it was naturally uninhabitable and we might as well give it to the Indians, but you know how we changed our minds about things like that. It has no mountains, springs, forests, caves, or anything attractive about the landscape. If you like outdoorsy activities you'll find yourself driving a very long way. It's 100 degrees in the summer and alternates between freezing and slush/mud thawing in the winter. We've made the best of our peice of the Arkansas river to pretty up downtown. It's pronounced Are-Kansas, after the Kansa indians, there's nothing French about it.

We do have very nice sunsets and lots of places to see the stars.

You can fly 60 miles away to Ponca City at night, turn your Cessna around and immediately see the city lights of Wichita.

Airplane companies Stearman, Learjet, Cessna and Beechcraft all started here. We pride ourselves on being the air capital of the world. Wichita is a great place to learn to fly. Large expanses of flat land, clear visibility, and crosswinds that build up your courage.

We have almost no italian restaurants, but a lot of great places to eat mexican and lebanese.

I moved here for aircraft work in 2002 and never left. I've made friends and put down roots. My two babies were born at the hospital within walking distance to our house. I seem to be blooming where I was planted.
Collapse