Whenever a press photo comes out of an experimental airplane doing tests for a major program, the most common question I get is "why is there a pointy thing at the front?" Some jokes about combat, shish-kabobs, or magical unicorn powers can ensue.

I'm not an expert on these but it's fun to have an avionics engineer explain non-electrical topics and shows that I see the airplane as more than just a flying case for blinky lights so here goes, I'm striving to do more.

The pointy thing at the front of a test plane is an air data boom. I don't like Wikipedia's entry on it, too sparse with not enough pictures, so allow me to expand. The boom's job is to hold airspeed measuring instruments way out in front of the airplane, where none of its wind-moving parts will mess with the measurements. It's sometimes a bright color or striped because we want everyone to notice it and not walk into it when they're working on the airplane.

It's quite common. In fact googling around different manufacturers first flight events of new models, they ALL had an airspeed boom. 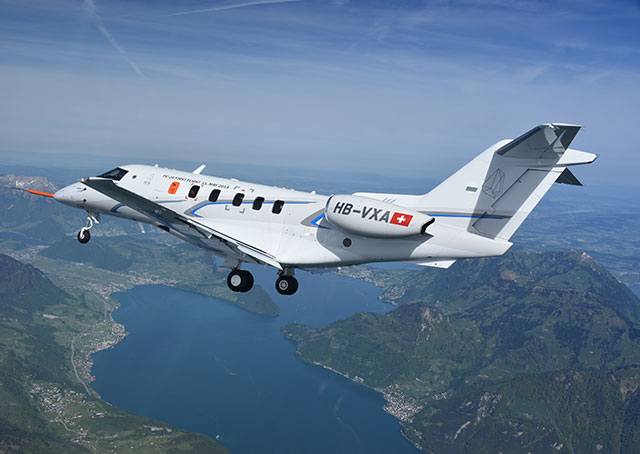 Sometimes when there's a pesky propellor needing that space, they'll put the boom out on the wing, like this GippsAero GA-10 (photo: motoroids)

For nice pretty airplanes we sell to people, we tuck two airspeed instruments away in unnoticable places: the pitot tube (pronounced pee-toe... it's french) and the static port. The pitot tube faces front and air blows into it so we can tell how fast we're going. The static port faces the side so we can tell what altitude we're at. The airspeed indicator on the airplane compares these two instruments - for instance at a high altitude, not as many air molecules are hitting the pitot tube. That's not because we're going slower, it's just that there are fewer air molecules up there. So the static port measurement gets considered in that calculation.

Using the test boom, we verify that the nice pretty hidden locations of the pitot and static ports are accurate enough at different airspeeds and altitudes, even with the wind currents of the airplane doing strange things around them. We also put numbers in a book that tell the pilot how far off those measurements will be... on a little airplane, the pilot gets to see Indicated Airspeed, but she's got the book to look up Calibrated Airspeed... which is the actual airspeed corrected for those placement errors. We use Calibrated Airspeed when we did the math to design the airplane and decide how fast it can safely fly, so it's important for us to tell the pilot the equivalent numbers in Indicated Airspeed, that way she knows what number will be showing on the airspeed indicator when she's nearing that speed limit.

That's why we only need that boom on experimental airplanes - we get the numbers we need, then you don't have to deal with it. You can get rid of it and use the nosecone for better things, like holding a weather radar inside of it. A weather radar is awfully handy, can stay nice and hidden, and definitely needs to be in the front of the airplane, unlike the pitot/static ports which we have clearly learned to correct for because science knows how air moves.
Collapse