Yesterday we took the girls to a market on south pawnee to see lion dancers for lunar new year, which trended on twitter as chinese new year, but I personally don't know any chinese people. There are tons of Vietnamese in Wichita, especially among the engineers I work with. People with the surname "smith" are actually outnumbered by those with the surname "nguyen". So at work I heard people call it the Vietnamese New Year, you just let your most closely associated Asian country claim it?

Anyway every year St. Anthony's Lion & Dragon Dance Team makes the rounds and thanks to the internet we can now see where they'll be performing and go see them and it's wonderful. Josie loved it. Olive thought she'd love it, based on youtube videos, she was getting ready and told us "I'm going to dance with the monster and pet its face!" but once the dancing and firecrackers started she was not as excited about it.

Although once again... still not sure how Josie's mental processes work, because she is still scared of sports mascots, but these bright shiny lions with drums running up to her face are neat.

She drew this picture: 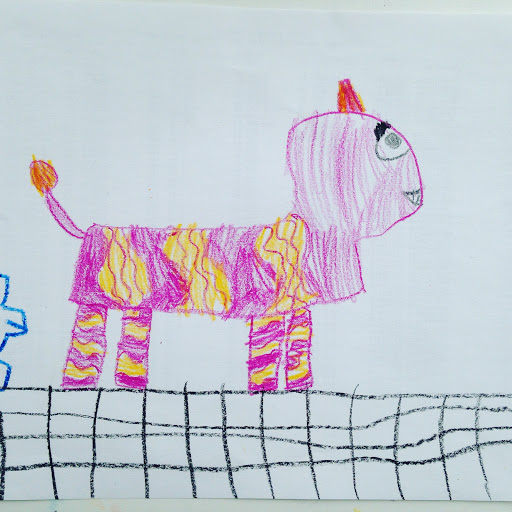 And here is Olive, not looking as thrilled as we thought she'd look: 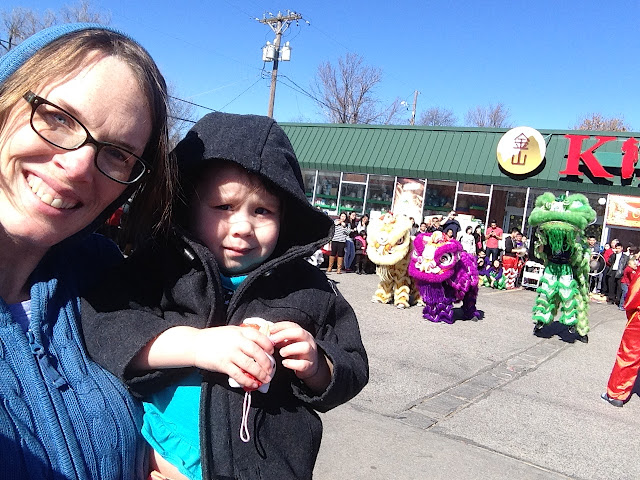 The dancers set their costumes down after the performance for photos, and then she got to pet the faces and bragged about it and thought it was just fantastic.

Final note: Josie has been bringing her big stuffed totoro everywhere with her lately, and marc let her bring it to see the dancers, I told her to leave it in the car but Marc wouldn't back me up and I thought it was super awkward that Josie wanted to bring Totoro because it'd make us look like ignorant white people who wanted to turn anything asian into an anime-fest. Marc didn't see it, he's like what, totoro is a normal kid thing, you're overthinking. So that was awkward. And part of the reason I took Olive to another area so we'd be away from them. I should have put my foot down but then I'd be pretending to be some kind of cultural appropriation expert which I am not. Parenting disagreement. Okay, it's done.
Collapse