Well, so was the end of day 1, because we went to the Hard Rock Cafe for their pre-party, to pick up badges and see what was going on. It was gaming in a bar! We played a drunk-ish game of Suspend, this Melissa & Doug game where you have to balance sticks on each other, it's fun, I took down the name. It might be more fun and less messy played sober but we were not able to test that after a bottle of wine in the room, cocktails, beer at the bar!

Saturday morning we were at the conference in time for the first sessions! I did some shopping and wandering around, there were gobs of fantastic artists. I brought some zipper pouches that I didn't feel like photographing for Etsy. There was a little girl wearing a brown trenchcoat carrying a sonic screwdriver, so of course I gave her a police box pencil case, her mom was there and said it'd be very well loved.

I haven't been to many comic cons, I'm not a gamer, so I was curious how this would all work out. It was different. I'm used to conferences where there are speakers with powerpoints, this was all panels with 3-5 people and various levels of moderator or audience questions. Several panels I saw, the people didn't prepare a whole lot, it felt like they just got together with their friends and sat up and took questions and there was a general theme. Some good things came out but it takes a while to get to a point or a big takeaway because the opening questions are so very preliminary. At one point I thought about recommending that the outlaw all "what got you into ___" questions from moderators. Some panels better, I noticed that preparation helps. I think as the conference gets better they'll be able to add some depth to the panels. That was my only thing I might have changed... the panel submission process wasn't terribly clear, the timelines to submit your topic, and then the site doesn't do much to say "hey we've got this panel of biologists (or whatever) if any other attendee wants to be on it send us your creds and we'll pass it on to the moderator." There were audience members who made statements in Q&A that made me think "whoh, she should have been on this panel!" I had this feeling like the people on panels were just in with the organizers, and someone from a really different background and a million twitter followers could just be fading in the background. And then you'd see these repeat names - the same person on three different panels - and wonder how hard they really looked to fill these. I think if they want diverse panels, and they've said as much, they'll start formalizing this aspect a bit. It's the fifth year of the conference and it feels like something that's grown fast, and maybe some aspects just need to catch up with the growth.

Just to back up my point some more - some of the seattle natives seemed shocked that I was there from Wichita. And one panelist in a full room asked, "How many people are not from Seattle?" and I promise 80% of the hands shot up and she was so amazed she had to rephrase the question - "How many of you are not even from Washington or Oregon?" as if we all just lived in Seattle metro, ha ha. Again, same tons of hands shot up. It's like the people who've gone to this conference since the beginning are just now realizing that this is big!

That said, there were some wonderful panels. There was one on geek parenting that was just magical and worth the trip all by itself. They talked about screentime with kids and how limiting screentime can just lead to pent up demand so what's the big deal with the limits, let's relax, just let your kids play with the damn ipads and stop stressing. Until that last hour before bedtime when we all need to turn off, kids and adults. They brought up one of my favorite takeaways about how geek culture is about embracing what you love and not caring who else loves it. Which leads to: other people get to embrace what they love even if you don't care about it. Which leads to: hey, we all love different things and it's OKAY! A great lesson for kids to learn - if we were all geeks we might be much nicer to each other.

And in a final kinda tearjerky moment, I noticed that the Q&A line was way too long and gave my spot to this kid in a pokemon costume, explaining to the confused little pokemon that I could tell she wanted to say something and it'd be really cool if some kids got to talk. We lowered the mic, she started with some kinda confusing bits about after school programs but what finally came out was a question about what to do if "kids say something is wrong with you because you have short hair and you don't like pink and you tell a counselor but nothing happens". WHOH. The panelist awesomely responded with some tips and finally ended with, "Remember - school is not the end all be all. Someday you will find your people. We did. Someday you'll be a panelist here! Outcasts have a way of finding amazing success, *this* (gesturing around to the conference) proves it!"

I also loved the one about how improv lessons can help us communicate science. We need to be better communicators, basically. So these two great women from fire and water consulting lead us through some group exercises that people do when learning improve, and explained how it helps you connect with the people you're speaking and interacting with. You know, now that I mention it though, they were really not a panel, they had prepared like crazy, so maybe that one doesn't count because it appeals to my bias of watching thought-out presentations with 10 minutes of Q&A. It was very educational.

And then I got to be on a panel! Which was great, but another "who you know" thing - my friend Rowan was on the one about STEM careers and let me crash it because she knows I really like public speaking. It was fun but all Q&A driven and I think we would have said more great things if we'd gone in with some main points and big topics that we definitely wanted to hit. A lot of the questions were overlapping or very specific - "I have degree X and 3.2 years of industry experience should I now go back for my masters" kinds of things. If I ever get to crash a panel again, I'll try to talk with the moderator or at least slip her some good questions first.

But memorable hashtag - #AllTheMath. As in, our advice to young girls who want to be in STEM but aren't sure which field, not all of them require statistics for example... doesn't matter! Take math every year! Take #AllTheMath!

Also #ConLife is what happens when your bag spills and you have to pick up this pile of art cards, clip-on ears, art supplies, science projects, buttons, a plush tribble, electronic devices, chargers for your electronic devices, sci-fi books... and finally your keys and wallet.

There was a fantastic costume contest with three categories - kids, groups, adults. The kids there were just fantastic, I will say that about the whole con, it was a village to raise your fantastic little geek children. There was a DIY science zone with great activities for various ages, panelists were asked to keep their language G-rated. Rowan and I talked a little about whether we'd bring kids in future years. They are not as jazzed about panels as us adults are, that's the only bummer. But they would love costumes, science, and the mega-floor of gaming tables. I loved walking around the game floor and watching parents try out new games with their kids and I wrote down more titles that I'll have to buy and review later, with the kids being there I could really see how well things worked for various ages.

All in all a fantastic conference and I'm thrilled that it EXISTS and is growing. I met people who have gone every year. If I lived in Seattle, that will be me! But given the travel costs, I'll come back in 2-3 years. I'm sure it'll be crazier and selling out faster and that's great - maybe I can just sponsor from afar or something. I just know it definitely has its own vibe, it was educational and fun for me and I met some amazing ladies, so I hope it goes on forever. 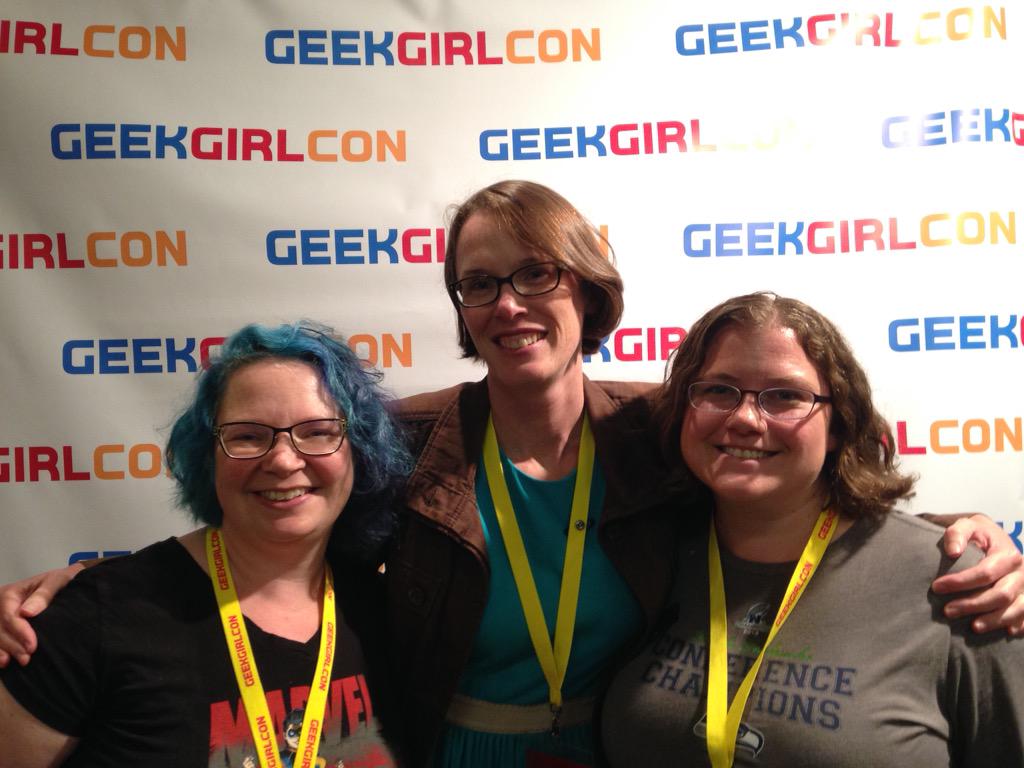