Some of you know that I am a big fan of Little Free Libraries - those little cabinet-like structures built to hold ~20 books in some random nice person's front yard. They're all over the world now and the trend is growing like crazy!

Well this year, I'm happy to say the LittleFreeLibrary.org site re-vamped their map page. It used to list every LFL on the planet and took FOREVER to load, but now you can narrow the list by city or state. So it makes road tripping so much easier! And yes I confirmed that if you're on a road trip, you can leave "city" blank, just put in a state, and the filter will be happy.

Here's the map of them all:
http://littlefreelibrary.org/ourmap/

1) Visit libraries in my area to see who's got a surplus of books - some of them are loaded up like slide lock puzzles, crammed shelves of books with more books shoved on top. This tends to happen to LFLs in "nicer" areas, hate to say it.

2) If a library is "basically full" it's considered impolite to borrow more than 2-3 books. But if it's crammed full? I don't feel so bad about taking a few more. Especially ones they probably won't miss... beat up paperbacks, western fiction, reference books. Trust me you are doing them a favor. Kids books are considered premium so only take those if it's really crammed or you're really going someplace in need.

3) Then on your next road trip, plot out some new libraries. Take a box of books, either from LFLs in your area or from your own collection, and stop at as many LFLs as you can. Bonus points if it's a library in a crappy tiny town - I've found that those are the ones most likely to have more space.

And keep the circulation going. If you want, grab more books from those libraries and take them back to your town just to get some new titles in there. Most LFLs have a stock that changes fairly regularly but not all. If you're in doubt about whether it's okay to take books, knock on the door of the steward's house or shoot them an email to ask how they're doing (many of their emails are on the LFL map website). 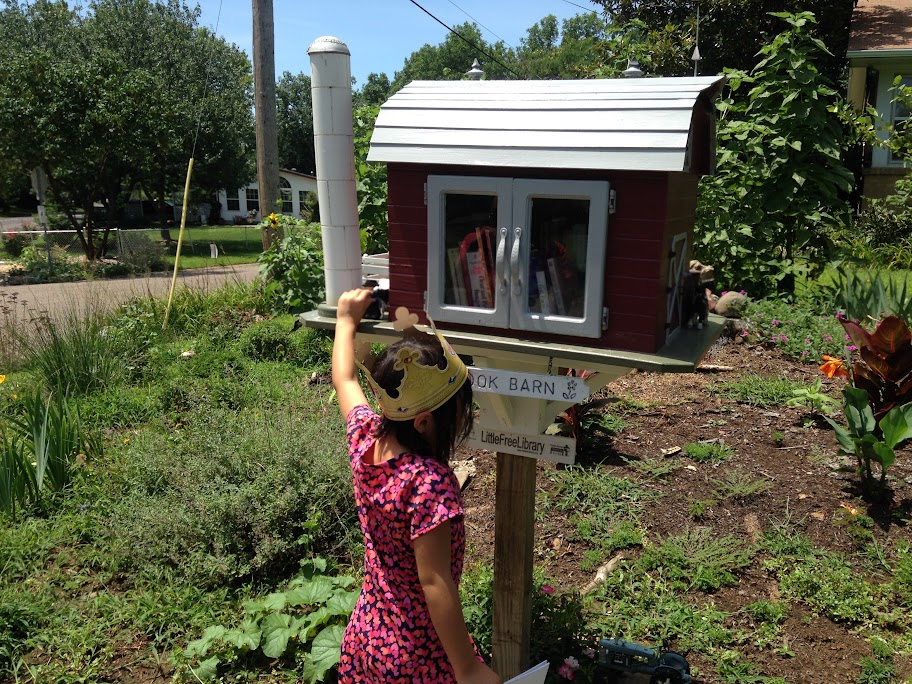 My Five Year Old at The Book Barn in Columbia, MO