some of you know I'm a has-been hardcore activist in Kansas.

In 2005, our state voted to amend our constitution to ban not only gay marriage, but any union or relationship that would even look like marriage... civil unions, contracts, the works. and I fought against that with every breath. Me, and about a dozen other core activists in wichita, and another 50 some volunteers, but I was an officer on the board of the organization, and helping to lead the fight. We went to houses and knocked on doors, made phone calls, hung out at bars to register voters... whatever we could do. And then, like the violinists on the Titanic, we had our hearts broken. We knew it would happen. Whenever you let people vote on how to treat a minority, what's their incentive to look out for them? It'd be like going into a meeting and asking everyone to vote on whether Bob here should buy us lunch. Yes, sounds great! So you ask a bunch of straight people whether same sex couples should have ANY rights, and of course they said no. And I was crushed. But I felt like I'd done the right thing.

I remember my parents asking me why I'd spent so much time on that campaign, because isn't politics just a pendulum? People will come around, just float with the tide, don't sweat it.

So Friday the supreme court ruled that marriage rights have to be extended to same sex couples. I went to the rally after work, hugged our chief lobbyist and he said to me, "Remember ten years ago? It's all washed away now."

But who's to say whether we'd be here if a bunch of us hadn't fought? We could have just let our state have the amendment, knowing it'd go away when people came around... maybe. But if nobody ever stands up and has a conversation, do people come around?

I wrote this entry about why I was glad I fought even knowing that we'd lose. And I still agree with every one of those points.

So that's my takeaway this week. Aside from the happiness, of course, that same sex couples can get married... I'm proud to say I helped fight for this. And I want to tell my people, especially young people, especially my kids someday... get involved. If you see something wrong with the world, make it better. It doesn't magically change.

Have hope. I didn't have hope, in 2005, that's for sure. Hearing people scream at me on the phone that marriage was MAN AND WOMAN, seeing my newspaper juxtaposition a portrait of Jesus Christ next to the homophobic side despite the fact that Jesus never said a word about homosexuality... it all wore on me. I just thought there were so. many. haters. How could we fight the flood?

I wasn't alone, that's how we fought it. But we gained momentum, the world change, those enthusiastic teenagers holding signs outside our pre-election concert reached voting age.

If nothing else I personally got to see it all and I'm really happy about that. So that's one reason to be involved... it makes you a better person.

And I know there's still things we need to fix. Deep issues. Things aren't perfect for same-sex couples, there are still questions to be answered, there's still discrimination, especially in my state. This was just a step.

But as always, I was there. 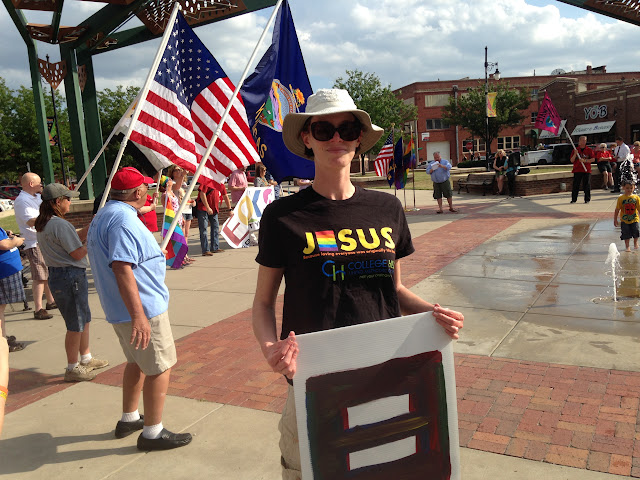