fansee asked me this question for the 20 questions meme:

Do you have any sibs? How did they (or their absence) affect you?

I do have a baby sister. She is three years younger than me and lives about two hours away, so we don't get to see each other as much as we'd like but we're still very close. We're the same almost, me and her. She's like the liberal arts version of me.

things we have in common:
- both like crafts and graphic design
- feminists
- pride in Kansas, even when it's politically different from us
- oh yeah, politics
- both married, both moms, both have daughters
- both working while our husbands stay home with kiddos, amazingly
- love books and musicals
- both have dogs

things that are different:
- she majored in political science, I majored in engineering
- she went on to work at non-profits, I went on to work for very much for profit
- I have brown hair and she has blonde hair
- I sew, she knits
- I have guinea pigs, she has hermit crabs
- I told her pregnancy was a fun adventure, hers didn't go as smoothly so I felt kinda bad about that but we as a family got to learn about hyperemesis gravidarum so there she goes educating everyone again!

I like my sister's politics, so I'm inspired by her activism and all the protests she's been to, although we've been to protests together too! nothing like storming the steps of the capitol together with your sister. and she loves that I fly airplanes.

and it's true that she did not go into engineering which I was sad about but there's a few funny things about that. first off, in several offices she's worked at she's ended up being the "tech support", the one who knows about spreadsheets and tells people how to fix their word margins or whatever. second, I was hanging out with a bunch of her friends once talking about how my sister and I have a lot in common but she didn't grow up to be "a nerd like me". they just raised their eyebrows and said "oh trust us, she's a nerd." and I realized that yeah, being a nerd doesn't mean you have to have an engineering degree. but if you've got that kinda overboard thing where you can't love anything halfway, have to over-research past what the average person gets into, then you're a nerd.

here's a blurry family selfie! me, my sis, and her new baby girl last summer. love both these girls so much, I was THRILLED to be an aunt, so thrilled I cannot even say: 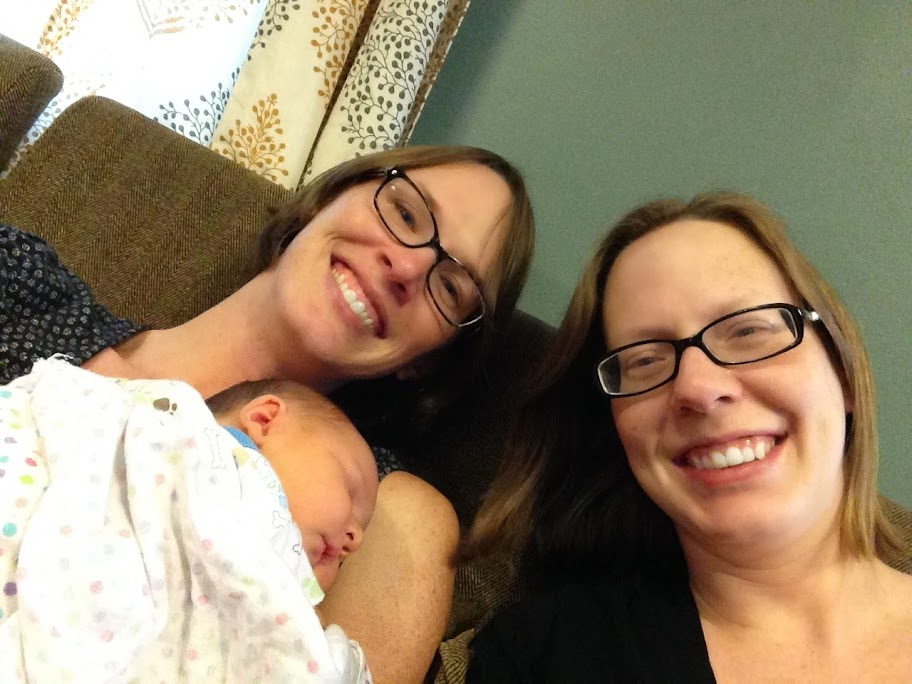