since I have new friends, or friends who just have bad memories, I figured I'd post an entry about my dog. 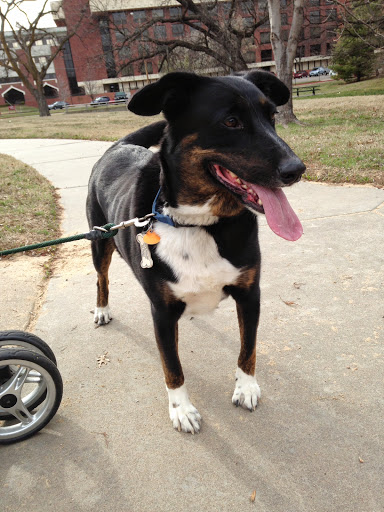 It's been almost four years since we got her. Our first kid had turned one and I'd wanted a dog all my life. We went to the humane society and told them we needed a younger dog, not a puppy, preferably about two years old. The only criteria was that it could not eat guinea pigs or babies.

Well we walked around and looked at dogs and saw this puppy. We'd said we didn't want a puppy but dammit, that's how they get you.

the breed of judy is a great mystery, when people ask me what kind of dog I have I say "black". sometimes "50 pounds, about knee high?"

Granted, we've still got this problem where when it's time for a walk Judy's going ape shit as if she's never gone for a walk before and I'm holding the leash just saying, "Sit for your leash. Judy. Sit." and I'm not doing anything, because our classes said that's how you get your dog to sit for her leash, you just stare at them and be patient. After YEARS of doing this now, it still takes Judy a lot of bouncing before she decides to plant her butt down and leave it there for five seconds.

true to our original request she has never eaten a guinea pig or a baby. she kinda herds the guinea pigs and is generally concerned for their well being, like if there's drama going on she'll go sniff to investigate. and the babies, she ignores or lets them chase her around or chases them. she loves playing tug-o-war and josie is almost big enough to be a worthy opponent now so that's a fun game. I used to take her running, I should get back to that, it was good for both of us but work's gotten me going in earlier. we go on walks to the park with josie on her bike.

that's it, that's the update, just saying Judy's doing well and we love her.
Collapse