Last week when I was in New York I get this text from my mom that "baby girl is here!" and... not much else. I got a pounds/ounces a bit later and stalked my family on facebook for pictures. My sister's baby was due August 15th, so when I set up the new york trip I told my friend we had to avoid mid-august. I knew being gone August 5th was cutting it close but hey, not too close, most babies don't show up 10 days early. I know because I am the internet's largest collector of due date statistics.

Well I missed my nieces' birth!

BUT it was okay, I got back into town and we went up the next day to meet the new little one. Her name is Amelia and I think she is AWESOME: 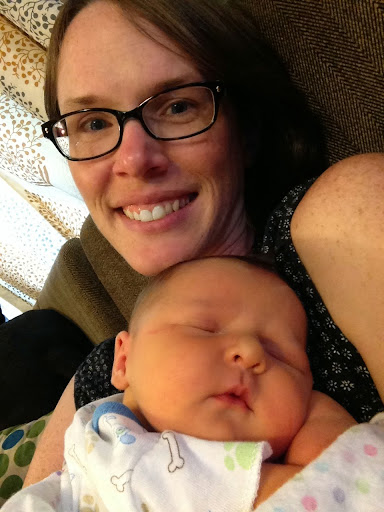 I think I will be great at this aunt gig, I've been almost as excited about it as I was when I had my own kids! It just sounds so cool, being the aunt, giving the risky advice, being there.

And the fact that my feminist sister and I have now made three little girls between us? Pretty badass. We have enough for our own riot grrrl band. Sure, either of us would have been totally happy with baby boys but the girls, well, what can we say.

I spent hours getting some quality baby-holding in, scrunchy newborn against my chest barely squeaking. Josie was so excited... WAY better with a baby than she was when Olive was born a year ago. It's an age thing. I look back at her last year, just about to turn three, and she looks like still a baby, couldn't even really hold Olive without us having a hand supporting her head. Four year olds process the whole "baby" thing much better. Maybe that's a better kid spacing.

Well anyway watch out world, my niece is one more kid whose going to have a lot of my influence... really she'll be just like having all my influence because my sister is almost the same as me, just imagine spacefem with an arts degree and lighter hair and you've got my sister. this will be one great group of cousins!
Collapse