Last week I took that trip to New York City that my friend talked me into and I am happy to say this trip went a lot better! I avoided the entire upper east side of manhattan - that was my main strategy. Don't go north of Times Square. Here's the rundown:

Tuesday - got into town, checked into our hotel. We stayed at the Paramount in Times Square. Cate picked this because it was right by our broadway shows then confessed that she hates crowds, so maybe staying in Times Square wasn't the best idea?

We started walking south and did some shopping in the garment district but eventually took the subway to Greenwich Village where we ate at the Mermaid Oyster Bar. I loved the food. It was happy hour, we got some good deals. Also really enjoyed browsing in the Village but I didn't buy anything.

Oh except this photo of me at MJ Trim... yeah I did buy some things there! what a cool place! 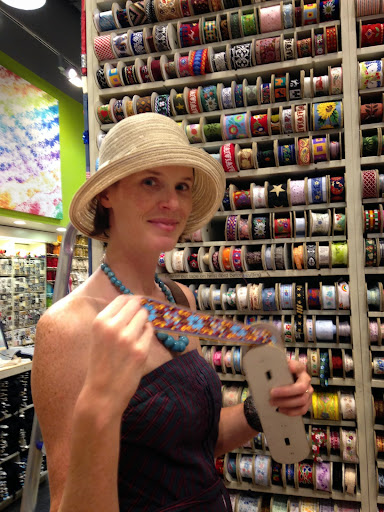 Wednesday - tried to go to MoMA in the morning. It was okay. Crazy crowded. We were herded like cattle, and moved through everyone from room to room trying to go fast because we only had like an hour.

Saw some impressive pieces, love their Picasso. But honestly, if you want a quiet room to stare at a Van Gogh or a panel of Monet's Water Lillies, go to the Nelson in Kansas City.

Lunch at The Irish Pub near times square that was surprisingly good, but tons of food that I couldn't finish. I had a chicken dish with a curry sauce on french fries, it was awesome.

Checked out some pricey designer clothing stores on Madison avenue and 5th avenue. Walking in was a little intimidating but the store staff were surprisingly nice to us even when we bought absolutely nothing. 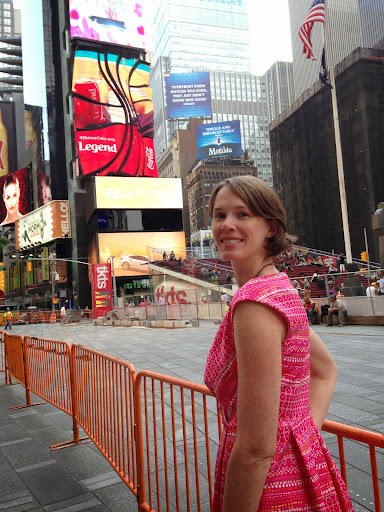 For dinner we went downtown to this place called Eatily that Cate had researched, it's kind of a sprawling italian market with a half dozen or so small restaurants, tables set up right in a shopping center kind of environment. We picked the seafood place. I wasn't impressed with my fish, the waiter was ambivalent and not good at recommendations, and it was hectic and unrelaxing. There was another eating spot with people just having wine and cheese and that looked like a nice choice. When we got out, most of the shops nearby were closed, that was too bad.

We made our way uptown a bit and found Ayza, a yummy little wine and chocolate bar. Had to wait 15 minutes or so for a table but they gave us wine samples while we waited which was very kind, and then the chocolate was delicious so I was really glad we stopped for desert.

Thursday - I learned that I have an employee of Etsy who follows me on Twitter and offered to give us a tour of Etsy. So we went to Brooklyn. Such a good idea! First off the Etsy tour was wonderful, it's got the whole hip startup atmosphere, great creative spaces. I will write more.

We had lunch at Miso Fusion because I wanted to have sushi at least once in New York. Loved the lunch, and it was less expensive than sushi in Wichita, which was weird because all our other meals had been pricey but I bet "access to fish" is a price factor. Where we live the good stuff is all flown in and we pay for that. 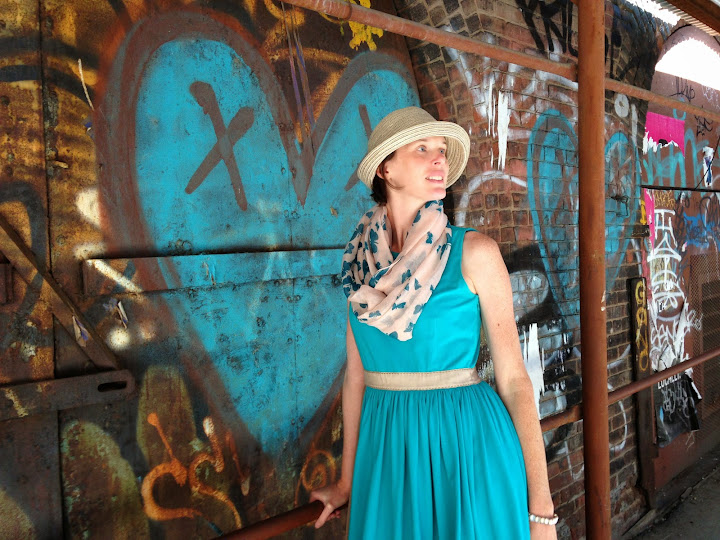 We walked down by the water through Brooklyn park and it was beautiful. Got up to a subway station and took it further in to the Brooklyn Art Museum. This was a much calmer museum experience and they have a fantastic collection. I was drawn there for feminist art, Judy Chicago's "Dinner Party", but there's a running theme of activism and social movements all through the museum. I was amazed by the giant tree and paper cutout ships by Swoon on the fifth floor (amazing photo here). 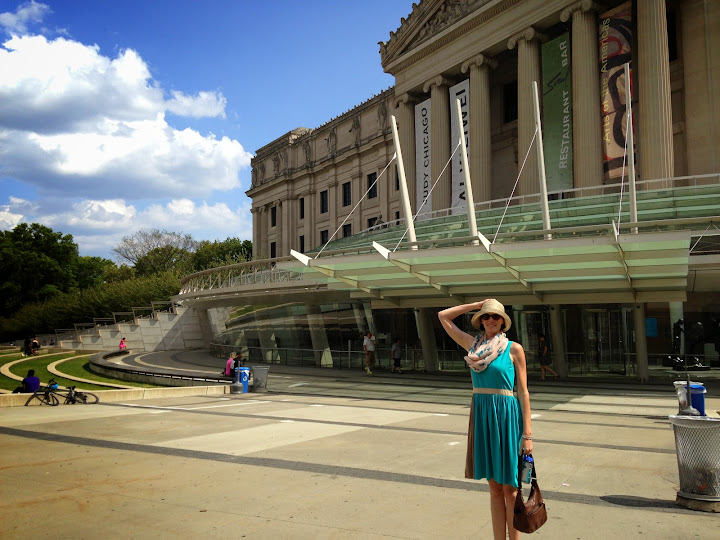 Took the subway back and got out around Chinatown. Ate dinner at Pellegrino's in Little Italy on a table outside, the weather was great. I had spinach ravioli. Wine was $11 a glass but they poured to the BRIM, so Cate and I were only barely sober enough to navigate our way through the subways back to times square.

We saw "Hedwig and the Angry Inch" with Neil Patrick Harris. It was great - our seats weren't great, it would have been much better to be on the floor. I've seen the movie LOTS of times so I know the music well, as opposed to Cabaret where I knew nothing, went in totally cold. I think going in cold is my favorite way to see a musical.

Hedwig was interesting on stage - a very simple set, just Hedwig and her band, with Hedwig talking about her life between songs. There were no actors for Luther, Hedwig's mother, even Tommy Gnosis. Just NPH telling you what they said.

I will say though... if you've seen the movie you know that at the end it gets a little weird, there's this sweeping song "Midnight Radio" that's neat but it kinda plays in the background while a mostly unclothed hedwig approaches Tommy in the theater, it's kinda sad and confusing.

Well in the musical, Hedwig has her strip down and take the wig off moment but then BELTS that song out in the spotlight, with glitter and smoke and the incredibly loud band, and it was amazing. Totally focused, people crying in the audience and holding hands, NPH wearing nothing but black briefs in the spotlight looking tragic yet perfectly chiseled and everyone loses their minds. Worth it for that number.

We got back to the hotel, set our alarms and woke up at 2am to get out of there and catch our way too early flight home.

That was our trip!

I was the gutsy navigator. Cate kept hinting that we could tell a taxi where to go and they'd just take us there, no thinking required, but I was like nope we can do this subway thing! Armed with smart phones and a crinkled map torn from our hotel magazine, we made it! Only got on the wrong train once and it's easy to just get right back where you came from. So much cooler than DC subways. Oh, then at Cabaret we shared a table with these two neat ladies from New Jersey who were shocked that we were jumping on subways, said we were very brave, they wouldn't take them!

We learned that most Starbuck's have clean bathrooms and short lines for them, but it was still helpful to plan things out a bit... like after lunch, go to a museum or something where you know there will be bathrooms. Leave your weird "browse little shops" times for the hours before you eat when you're dehydrated. I actually got back to Wichita, had lunch with my family and realized I could suddenly drink all the water I wanted because I'd have instant bathroom access all afternoon, it was shocking.

After my last experience in NYC I told Cate we were completely avoiding the upper portion of manhattan, no central park, definitely no disgusting Guggenheim, and I'm still happy with that choice. Honestly if I was going to go again I'd try to opt for a hotel even further downtown because there's more coolness there. When you get to times square you're in tourist land - only eat there if you're interested in like a five story olive garden or whatever, it's lame.

Oh and brooklyn definitely gets a thumbs-up, I could live there. It was maybe a 30-40 minute subway ride but so worth it. We were told to walk over the brooklyn bridge, did not do that because we left brooklyn from the museum and had to get on the subway anyway, but maybe next time.

Overall I got home and told marc I didn't totally hate new york anymore, it was doable. There were no awful experiences, we didn't get lost for any major period of time. I had fun.
Collapse