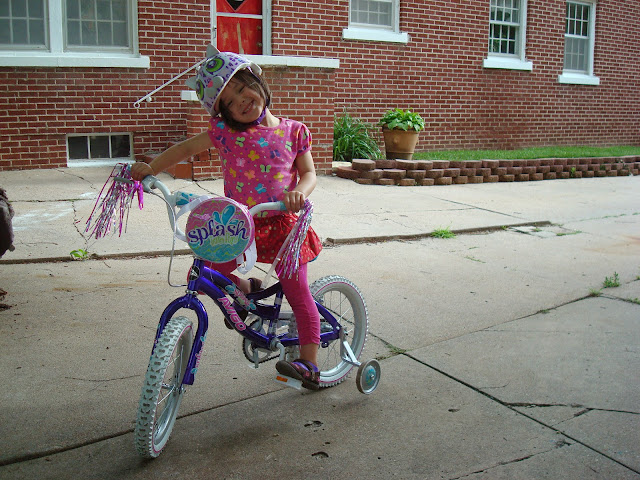 For her birthday we got her a big girl bike with training wheels. She had a trike we got secondhand from friends who got it at a garage sale and the thing was literally disolving. We'd go on rides, and the bike wouldn't make it home.

Josie took to the new bike like a pro! Tonight was our third time taking it around the block and she's already figured out on her own to stand up on the pedals to get up hills. She can kinda fall gracefully too!

We had a typical upper-middle-class american privileged birthday party. There were cupcakes and water balloons. She got lots of new My Little Ponies, including some My Little Pony headphones which she plugged into marc's ipad later to surf youtube on her own. She got hello kitty art supplies, plastic bubbles, two new water guns and some new dresses too.

Sunday we spent some us time together. We had to go to the fabric store, I bought her some new markers and glitter glue then told her we could eat lunch wherever she wanted so she picked fazoli's. She colored, I eavesdropped on conversations a table over... lots of parents talking to kids! Or young adults, the one closest to us was a mother telling her daughter about experiencing the world before she settles on a career. She seemed frazzled. I thought about offering to switch... here, I'll give your daughter advice, you answer my daughter's questions about whether there are more words that start with the letter P. Didn't mention anything though of course. I feel like my place is in a very good year.
Collapse