Josie's half birthday was this week, we celebrated like we always do by marking her height on the wall. 40.5 inches! I told her that was exciting because at 42 inches you get to go on cool rides and stuff. But anyway it's almost 90th percentile so she's tall... but not as tall as me. If she follows the curve she'll only be 5 ft 7 or so. 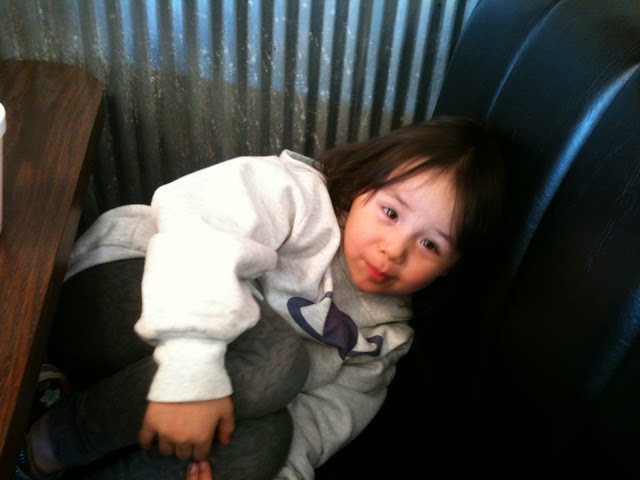 Things we love right now: she's smart, creative, loves to draw, always begging for craft supplies just like I did when I was little. Her and I walk around Michaels' like we're in heaven. I even like her taste in clothes, she'll come downstairs in crazy tights, a skirt and some random shirt and a hat and announce, "Hey guys, I look super awesome!" and we have to admit, she does! She loves dancing around with glowsticks when Marc plays house music, she walks around singing all the time.

And she loves her baby sister, she is one of the two things that Olive delights in the most (the second thing is the dog... marc and I are hopefully in the top ten). Nobody can make Olive laugh like Josie can. She loves holding her baby sister and telling her how cute she is, bringing her toys, checking on her.

Things we struggle with: Josie is really fucking nuts. maybe passionate is a better word... let's just say that if things don't go her way, she melts down, and "her way" is VERY SPECIFIC sometimes. my parents thought I was weird when I stopped dad from cutting up her donut, "don't cut it up unless she tells you to, it'll be ruined and she won't eat it!" but those are the kind of tip-toe steps we do to make our lives easier. When she goes to bed, after the stories and teeth brushing, we turn on her twilight turtle to get the stars to light up, but it has to be on green. Then *she* has to turn off her lamp. THEN we can change the turtle to blue. Then start her CD. If anything is out of order she loses her shit, you might be able to bring her back by offering to start over with the green turtle but if you try to tell her that it's okay, the lamp is off just leave it off, you're in for a fight. This sort of thing goes on all the time. Sometimes she breaks down because you did something wrong, and she can't even explain what the problem was.

Her language has improved a lot but her memory is still a little fuzzy, most of the time I ask her what happened in school today she has nothing to say. Then a couple hours later out of the blue she'll come up and tell me some random story from the toddler crazy memory banks... "Cammie's tummy hurt today and she needed her mommy. She threw up her broccoli and I told Miss Haskins it was like guacamole! guacamole! guacamole! guacamole!" ... WHAT?

Or this: "Mommy?" Yes Josie? "Hallie said earth was red but I said mars is red. Then I spit on her because I DO WHAT I WANT." ... WHAT? Josie we don't spit. And DAMMIT MARC stop quoting South Park to our three year old! To which he replied, "What-ever! I do what I want!"

She sometimes says bad words. If I say something she doesn't like, even something normal about how we need to go to the store or whatever, she says "Don't say that. It's not nice to say." Something tells me her preschool teacher has to repeat that occasionally.

She's an adventure of a kid, we're having a memorable year.
Collapse