Every year I try to grow some stuff, and every year I have some success. But not much.

I'm officially giving up on tomatoes. If I ever try to grow tomatoes again, just hit me. I've known perfect idiots who could grow tomatoes... coworker engineers who seem to hate the world, nature, and everything about the outdoors, then one day they surprise us by coming in with bags of produce and inviting everyone in a 50 ft radius to grab some fruit.

I tried to grow tomatoes and failed, the next year someone said "just start with little cherry tomatoes!" and that failed, then someone said "well start with plants not seeds, and spread them out!" and that failed... that's three years, people. Three years of loving and watering different varieties of plants, getting GIANT plants, that never make any fruit. I might as well be landscaping.

As in previous years, I grew herbs okay. The basil was nice again. Mint did much better since I grew it from plants instead of seeds. We had cilantro. And a ton of parsley - until last weekend, when these little guys showed up with appetites: 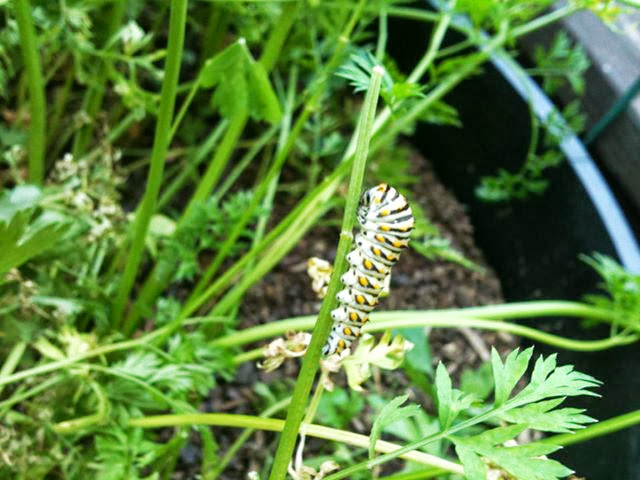 They scared the s h i t out of Josie. She was outside by herself and came running in screaming and crying that there was a "mean worm" outside, a mean green and black worm. I started the questions... "Do you want to show me?" no. "How big was it, was it long like a snake?" she held her fingers up about an inch apart (oh the humanity!). "Why is it mean, did it bite you?" No. It's just mean. I didn't even go outside, because the kid's a little crazy, but later I went out and saw the parsley and sure enough there were a ton of these little caterpillars, identified as precursors to black swallow butterflies, perched on various stems. And they were easy to see because there were very few parsley leaves left. They mostly of ate the tops of the carrots too.

Marc picked a bunch off and threw them to other less delicious parts of the yard but I told him to stop and leave the remaining few because they're butterflies, and we should be nice to them.

We had good dirt this year from the compost bin, that was fun. Then it got weird and started smelling bad because we thought you could throw a pile of damp grass clippings in there and not worry about it, turns out there are balance issues. I read to put in shredded newspaper, then realized that nobody I know actually gets a newspaper anymore. So I tore pages out of the phone book, which we also should NOT get but the darn thing keeps showing up. Turns out it's still good for something: balancing compost.

Bought a second rain barrel in the spring because last year it never rained and the one I had ran out of water. Then we had a record rainy season. That's how it goes. And the two rain barrels became champion mosquito breeding grounds. This situation was improved by adding screens to the openings, and pouring some olive oil in each one to keep the buggers from getting to the surface of the water, but the whole neighborhood is so full of mosquitoes my little improvements barely made a dent.

Josie likes to play outside. I googled west nile virus and wasn't sure what to think of it... apparently 80% of the population does not get sick from west nile at all. 19% gets sick, but recovers. 1% gets really messed up.

So I decided those odds aren't too bad, I'll keep letting her play outside because playing outside is good for kids. We have some "family safe" bug spray that claims to repell mosquitoes but experience has shown me it's not great - i'm spraying it on Josie just in case. But she's still typically covered in mosquito bites and doesn't care. We give her lots of baths and hope for the best. And I'll figure out some way to show her those caterpillars are alright.
Collapse