Yesterday the Supreme Court handed down their decision to strike down part of DOMA and all the gay rights world was happy! We'd been waiting for a long time, Kansas Equality had a moving facebook event for a rally that they'd update the time for whenever we had news. And we had news! So we packed up the family and went to old town.

Olive got to go to her first equal rights rally, yay! Except she didn't like it much because it was like 105 degrees. I tried to tell her that usually we're protesting early April ballot initiatives and it's ten below zero. But anyway we weren't out for long, mostly stuck to the shade, took her in and out of her carrier, nursed, and had a spray bottle to mist her off which she REALLY did not like. Josie played in the fountain.

We got this picture early in the rally, a ton of people showed up eventually and it was awesome: 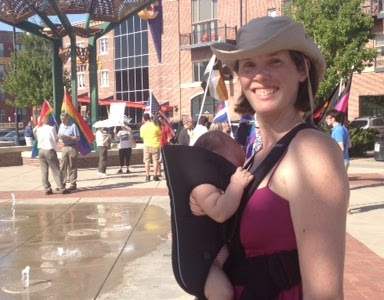 Sadly for Kansas only part 3 of DOMA was struck down, the bit about how if you live in a state with gay marriage, you have to be able to file your taxes (and do similar federal things) like a straight person. Part 2 of DOMA is another load that the US has to deal with... it says that no state has to recognize another state's same sex marriages if they don't want to. The constitution has a full faith and credit clause that says states have to recognize each other's public records, legal actions, etc, so if it wasn't for DOMA you could be gay in Kansas, get married in Iowa, come back to your home state and be married. Kansas gays have a road ahead of them. But haven't they always.

At least the DOMA decision (and related california prop 8 case) lends some hope that the world is changing, just a few old crazy people think gays are the worst kinds of sinners and bad for the country. It's becoming a less and less common opinion, and that's what we can wave flags about.
Collapse