Writing a quick update while the baby is sleeping... Olive does this thing where if she's pissed off and you know she's got to be tired, you can wrap her up and lay her down and she'll cry for five minutes and fall asleep. Josie never did that. We tried. She'd just scream... I'd put her down purely to save my own sanity, and go sew, and as she got older I realized that she could keep it going 45 minutes or an hour with no sign of slowing down. Marc left her for longer than that, I bet.

Anyway I am against most philosophies that suggest babies need tough love and crying is a training strategy, so we weren't willing to let Josie cry for the days required for her to fall asleep herself. But five minutes? I remember these types of babies from my sitter gig days in high school, just thought they were figments of my imagination or something.

This week I went back to work, which meant I had to wear something other that sweatpants and honestly, the wardrobe was the toughest part of returning. I just spent the whole week feeling like a big fat fatty, wore maternity clothes one day and that just made it worse, switched out to some larger slacks later. I sort of whined about it a little but everyone eye-rolled at me because I'm skinny by nature and these extra 20 pounds and weird "I just had a baby" hips don't make me obese by any stretch of the imagination, so there was a lot of "oh poor you" so I had to shut up about it.

Patience, I know. It took nine months for my body to get that way.

Oh, and my shirts don't fit either. Boobs. I don't even own the TYPES of tops that women with boobs own. There was a lot of layering. The boobs did appreciate the office breast pump schedule though... being reliably empty of milk twice a day spoiled them. I actually had to pump today even though it was sunday because they just couldn't handle a sleepy baby morning, damnit, there was milk everywhere and it was frustrating.

Sorry I haven't posted up more baby photos. She doesn't smile yet, so the pictures are a little redundant, she pretty much has one look. Here's a crappy dark cell phone pic. I took it one evening around bedtime... we were hoping she'd be looking drowsy but instead, we got the dreaded gollum eyes: 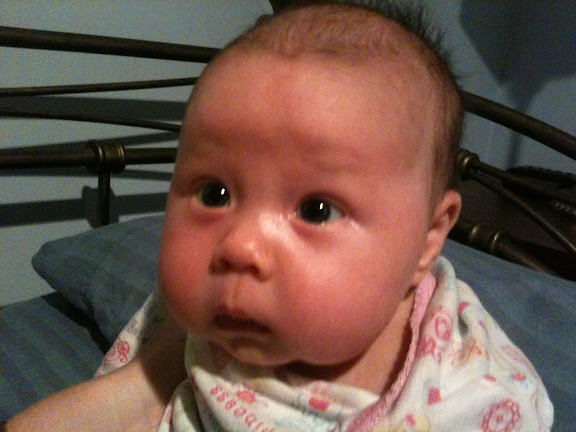 Josie is STILL randomly bringing up the fact that "there's no baby in your tummy? the baby is right *there*?" as if she's still getting her mind wrapped around this whole situation. And we bring stuff out like baby swings, chairs, clothes, and Josie asks if that was her stuff ("When I was a tiny baby I sat in that chair?") There's a lot of questions and comments. Josie had her 3-year checkup last week and the pediatrician asked us how many WORDS she knows, like a count or something, Marc just looked stunned and said "Um, a lot? Infinity? She knows ALL OF THEM OKAY?!"

Olive just says "oooh" and then grunts a lot, but she will talk someday. Egads what am I going to do in three years... I used to think marc was so damn chatty! So I had two of his babies, then left them with him full time? Have I set myself up to be surrounded by extroverts? Oh hell!
Collapse