Yesterday I was going about my business cutting up strawberries for a snack, and threw the tops in the guinea pig cage like we do. Two piggies ran out to get their treats, one didn't. That's how you know something is wrong. He was alive, but seemed lethargic, and suddenly skinny, which is weird because we hadn't noticed weight loss and it's not something that happens instantly.

We called some vets, finding one was awful, the one by us was on vacation, there are like 3 or 4 in the entire city of wichita that take guinea pigs. Another close one said they were booked up today, could work us in at 4pm, I was trying to explain that something fast and awful was happening and we needed to be seen NOW.

Finally "All Creatures" way out on the west side said they were booked up, but bring him in and leave him and they'll work in a visit somehow... phew. But it wasn't good, they said he was awfully weak, and when they tried to x-ray him he just stopped responding.

The x-ray showed heart failure. So at least no infections, nothing to make the other pigs sick.

I'm torn about whether it was the right thing to rush Jabba to the vet, maybe he should have spent his last hours at home with his friends. He was at least six years old. But if we hadn't tried I would have wondered about that too, there are simple infections that guinea pigs can get that are easy to treat. The issue, our vet said, is that guinea pigs are prey animals who instinctively hide their illnesses until they're really, really sick, and by then it's often too late.

Anyway we went back to the vet and got Jabba and now he's buried in the front yard near his longest mate, billy dee.

It's been a tough year for us and guinea pigs! I guess that's what happens when you get four in one year... you're setting yourself up for a sad year down the road. Pinky died in May of last year, Billy around Thanksgiving, now Jabba. We just have Brainy and Ferdinand.

Rest in peace, Jabba, we miss you. We loved how your fur coloring made you look like a little cow. You were amazingly fat. You kept the other pigs in line. You were a good pet. 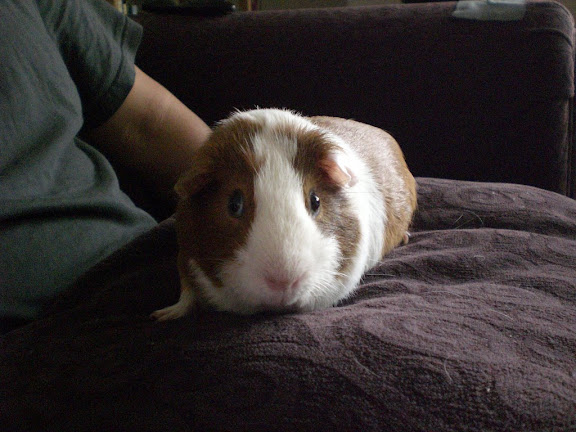