here's who I spent my birthday with: 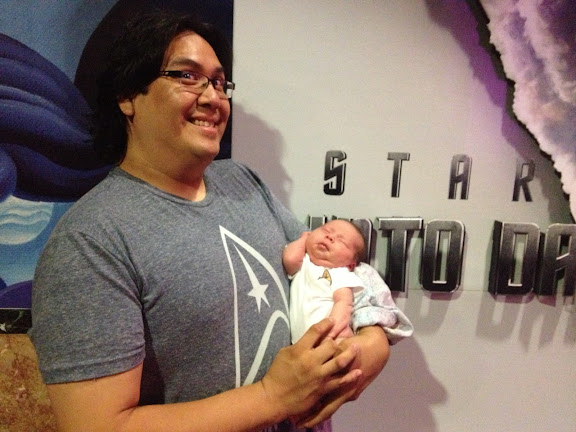 we shipped josie off to her grandparents so we could have date night, but kept the travel-sized one who just squeaks and snorts and snores through life, in between nursing sessions.

first there was a quiet afternoon, then we went out for sushi which I can officially eat without guilt since I'm not pregnant! and I had a wonderful martini. then, the movies! we went to the big warren theater that has a cry room just in case olive was going to be upset, and brought hats to cover her ears in case it was too loud. she slept the whole time. ate twice. that was the highlight, we didn't even head to the cry room.

Star Trek was okay. everyone else seems to be loving it. It failed one of my big tests for halfway decent writing: can you have a female character who's not reduced to a daughter/girlfriend/sex kitten? the first Star Trek had uhura... smart, strong, snippy with kirk when he hits on her in a bar! this Star Trek has uhura: whiny girlfriend who makes everything about "us" and can't even put on her big girl face when speaking klingon. why do writers have to do that to women? especially when there's only one main character who's female? (they tried to introduce the science officer, but she was mainly defined as the admiral's daughter... everybody's just gotta be around for a man, huh?)

I mean, zoe on "firefly" had a boyfriend too but she was still a badass, she did her job without being all doe-eyed all time, she wasn't any more distracted by love than her husband was. so IT'S POSSIBLE. and it makes the whole cast of characters seem so much more three-dimensional. like you put some thought into it! when I see these big-budget movies with spectacular special effects, hot actors, and funny dialog, it ruins it for me when the female characters are the same tired boilerplate people, just there as accessories for the men, not even as thought-out as the props.

well anyway, here's to the rest of the franchise, to tasha yar and klingon sisters and doctor crusher. it's good for everybody to have a big Star Trek blockbuster at least once in a decade, I hate to see it screwed up with such obviously lazy writing but it happens.
Collapse