In case you're tired of cute baby photos... here's the kind of stuff Marc likes to post up, ha ha. why do newborns look like angry old men?

Oh no, it's disapproving Olive: 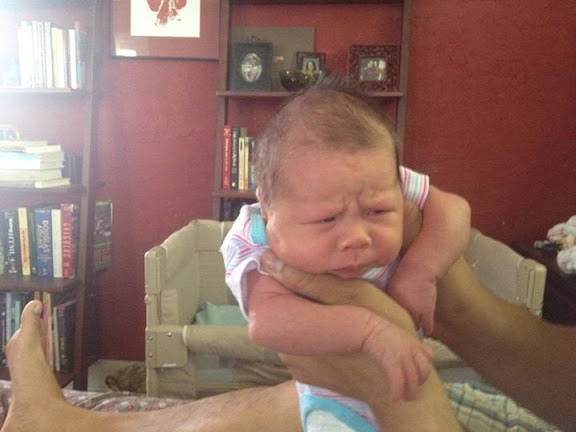 Here she is being happy. Well, actually just kinda drunk on milk since she's too little to actually be happy... full is the same thing for this age, I guess. 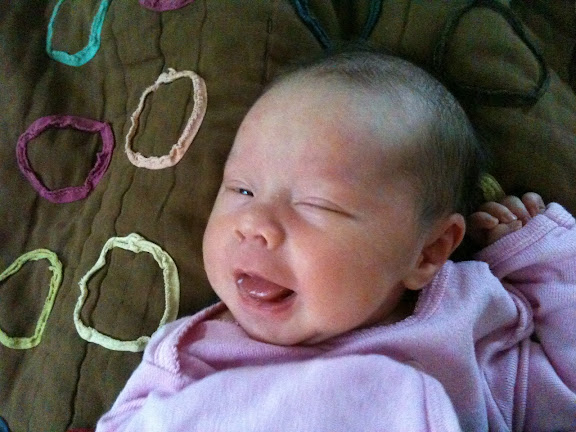 I'm kinda bracing for impact because right around two weeks, Josie started getting super pissed off about life in general, crying for hours at night, we're talking midnight to seven angry baby marathons that were torture. Olive hasn't started that yet. In fact for several nights in a row, she just slept, with a few interruptions to eat but she'd go right back down for 2-3 hours. Last night she was up from 1-3, I watched a couple Mad Men episodes, but as long as I was holding her she wasn't mad. With Josie we had to be walking and bouncing her in a very specific way and sometimes not even that would work. Anyway that whole first experience has made me just not trust babies, they can turn on you at any time.

Along those same lines, some gals from work had told me I should totally come out to lunch with them, bring the baby, they'll hold her, I'll have a nice lunch! I see right through that crap now. It doesn't work. I tried with Josie, and after ten minutes nobody felt like walking around with my baby, they were just like "Okay she wants her mom, shovel that food in Spacefem, thanks for bringing the baby around we're done now." It was awful.

Deep down inside I wonder if Olive could be a different baby, a not-high-maintenance baby, but it's too early to make that call. I just know that we made it to her 2-week pediatrician appointment and did not ask the doctor where it was legal to leave the baby if we'd changed our minds. It hasn't come to that point yet. With Josie I was about to put her on craigslist by day 14.

However, just like Josie, Olive is packing on the fat! Once again my body is talented, may too talented, at making milk... in fact this time I've HAD to pump a few times. The pediatrician measured Olive TWICE because he said it would be insane for her to grow 1.75 inches in two weeks, and finally we all agreed that surely the hospital got her length wrong at birth, but I think I've seen her legs get longer. She's also 15 ounces above her birthweight, which is 18 ounces above what she was as a 3-day-old and had lost a bit. She weighs 7 pounds 2 ounces now... almost the size Josie was at birth.

I'm still confused about why she was born so small. The hospital even ran some extra blood tests to see if there was anything weird... she wasn't dangerously tiny, just kinda below average. I gained like 45 pounds. I thought all those biscuits and gravy were for the baby.

But no, apparently I am made to over-nourish my babies only after they're out of me. That's a little more convenient anyway, I'll take it. They spend a lot more time out here anyhow.
Collapse