Olive is ten days old and doing great. The past two nights she's slept, with interruptions for eating of course. But I am bracing for impact because I know around 10-14 days, Josie started getting crazy. There were the 12-7am screaming fests, the 24 hour cluster feedings, the general anger that I think lasted until she was about two months old... or three years old, depending on who you ask, she's still not exactly a laid-back kid. 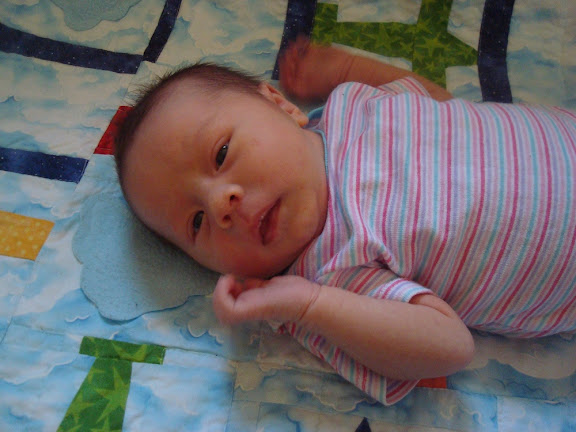 Marc's been tackling the scary room in the basement lately, reorganizing, getting things in clear boxes on shelves. I think this was mostly inspired by our adventures in trying to find our baby stuff. All those little clothes and simple toys were in there, somewhere, put away very lovingly, surrounded by stuff that was not put away quite so lovingly like empty boxes and the dreaded "we never did unpack this when we moved in" category.

We got Josie enrolled in a preschool for next year. We looked at three, because we woke up in April and realized we needed to do this and I was eight months pregnant, in fact I had the baby on the day that our last appointment was scheduled. Lucky for us childbirth was no big deal this time and we just rescheduled for the next week.

After reviewing a few places we figured out what was sort of important to us in a preschool:

1) Plenty of evidence that the kids just get to play, nothing too structured, maybe a little circle time but a flexible curriculum and interactivity.
2) Rooms decorated with mostly kid art and some natural elements. Extra bonus points for every actual animal they had in the room. Seriously, this is kinda what it came down to... at least have an ant farm.
3) Low cost. I had a few friends from out of town tell us we just had to look at montessori schools, but I didn't see a reason to spend $450 a month on a preschool when there are plenty of nice places for $150 a month. She's three years old, it's not like she needs some miracle teacher to reach out and inspire her to become the astronaut or future president inside her NOW.
4) That said, I did want the teachers to at least have four year degrees in some early childhood field.
5) Security, or at least someone watching the door.
6) Close to the house. Same argument as #3.
7) Some mention of awareness of Wichita kindergarten requirements was nice.

We also checked for clean bathrooms but they all had that. I didn't care too much when they talked about field trips since Josie's been to the zoo plenty of times. One place had a really nice room for 3-year-olds, but due to enrollement overflow they opened a second room that was not impressive at all I thought.

So yup, in the fall she's off to preschool.

One thing about Olive, she has made Josie look HUGE to me. I used to think Josie was so small and delicate, tiny fingers and toes, short, weak. Now I suddenly see her as a kid in every sense of the word. She gets herself food and drinks of water, she can break things with her strength and needs to hold back every once in a while, her feet and hands look like mine only a little smaller. She observes and remembers things. I'm still worried about her, sure, but it's different now, and this preschool thing just isn't blowing my mind at all. She'll do great.
Collapse