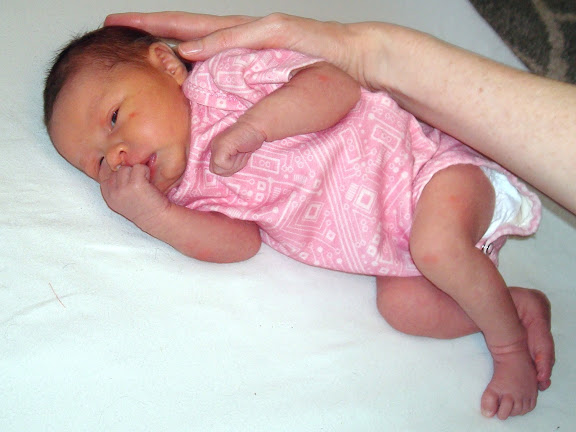 Day 4! Yesterday was fun, Olive had a lot more good awake time with eyes wide open to check out the world. I had just been thinking that it's a good thing the first couple newborn days are so sleepy, like on her second day we were stuck at the hospital waiting for my OB to sign discharge papers and I was like "Yes child, you are going to have such an amazing life in this world of endless possibilities. But for now we're just watching 'Encino Man' on TV..."

Anyway, today's issue is that my body is really trying to prove that it remembers how to breastfeed by just going absolutely crazy with milk, and Olive hasn't been the hungriest baby, she latches on for like 3-5 minutes then passes out. A few times yesterday after a long sleep (which she only does during the day, not at night, because you know...) she'd stay latched for ten minutes but those times were like amazing.

okay so I'm doing the right thing by resisting all urges to get out the breast pump, right? it'll only make the engorgement happen again by increasing supply? there was milk everywhere last night, such an awful mess, plus olive had an epic spitup that resulted in everyone involved changing outfits, right now I have one full boob and one incredibly rediculously engorged one and that's what we're working with, I just want to know I can tough it out and that this is transition day, let my body figure out the right supply naturally, being kinda full right now won't lead to any other issues? I will gladly accept advice from the gallery but I might just call lactation today to ask if mastitis comes from "toughing it out" because that shit scares me.

as for the baby, hopefully today we'll get in to see the pediatrician, get a weight and see how we're doing, I think the kid looks a little peachy in photos and josie had such nasty jaundice it scares me. once again i've had a baby during a week of straight cloudy rainy days when there's no sunlight to treat it, hell. but josie had low bilirubin counts in the hospital and olive did not, so maybe we'll be alright. but josie ate a lot more. hell I don't know.
Collapse