Well look who showed up: 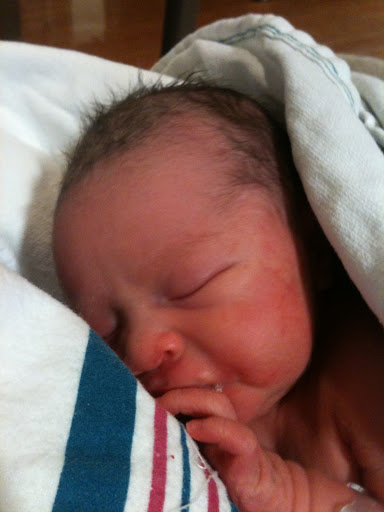 Her name is Olive Elena. She weighs 6 pounds, 3 ounces, is 18 inches long, and was born 5 days before her due date around 1:30 in the morning.

Yesterday I had a totally normal prenatal appointment after work, I was dilated to 3, I told the doctor I was feeling just fine being pregnant for longer and there was no need to talk about any schedules just yet.

We went to a retirement party, we got home, my back hurt so I took a bath, it kept hurting but at regular intervals, you know how it goes. This was around 9pm?

We were at the hospital by midnight. Five minutes after they got me to that bed, my water broke.

I got the epidural. I was miserable. My natural childbirth experience with Josie was not all that magical and this one was pure back labor, every movement brought on pure surging pain that didn't taper off, and to be perfectly honest the blogger in me wanted to be able to talk about what both experiences were like. So I called for the drugs and the world just went calm, I could talk about thoughts with Marc, progress kept going really freaking fast... I mean FAST. Which brings me to my next point:

90 minutes after we got to the hospital I felt pressure against my rectum, they told me I was dilated to 10, called my doctor, she showed up and they said "time to push!" I was asking about strategies, positions, changes, I wanted a WARPLAN because it'd taken two hours of squatting with gravity to push my first baby out and that's with me being able to feel stuff, now I was numb! The nurses sort of nodded, then told me to put my legs in the stirrups, I sat up as much as I could, the contraction hit, they counted with me through three pushes and the baby came out.

There was a complication with the placenta, it didn't come out and we're not sure why, I was holding Olive and couldn't feel a thing because of the drugs and that was a good thing, because after thirty minutes of massaging and pressing I think they had to do something, like just pull it out? I'm not sure, but there was a ton of blood and they have me some special drugs for extra blood clots that were coming out later.

But I needed no stitches, I could go to the bathroom by myself by 8am.

Josie met her around 10 and didn't seem to know what to think, she was excited, held her very nicely. Then she spun around and showed off for her grandparents, aunt and uncle that were here just to make sure the attention was on her.

Now it's noon, the epidural's all worn off, I'm a bit low on sleep (I think I got some from 5-7 am?). Olive had been nursing well but now she just wants to zonk out and they're telling me that's okay. And we are a family of four!
Collapse