so here's the little bug: 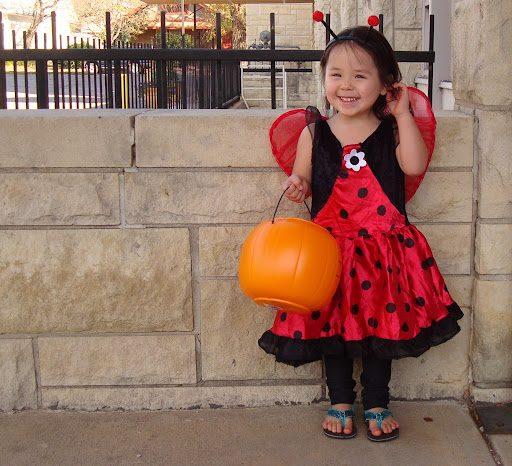 My darling angel actually trick-or-treated at my OWN house and I don't even think she recognized it. I was sitting on the couch watching The Crow, Marc and Josie were trick-or-treating with neighbor friends of ours, with plans to eat chili there afterwards, I'd already polished off a freezer pizza and was LOVING a little time to myself, and the stream of kids was very steady and entertaining this year.

Anyway the group that Marc's with gets to our house, knocks on the door and jokingly says "trick-or-treat" and Josie's right up front, open Nerds in one hand, holding her plastic pumpkin straight out to me and looking off in the distance.

I'm like "Josie sweetie, what do you say? Say trick or treat!" and she looks at me, raises her eyebrows and gets this smirk like "Seriously, just put the candy in the pumpkin I KNOW THAT'S WHAT YOU DO."

Last year she'd never even eaten candy, she was barely 18 months old, and we took her to one house and opened a single dum dum for her and she looked at us like "You guys... this is what I'm SUPPOSED to be eating! Did you KNOW about this?" Then she proceeded to toddle up to every door and when they held the bowl down for her to grab a piece, she'd go for it. These were people unsure of whether she'd understand or even have the motor skills to get a handful of candy... oh no, she did. It was seriously the fastest thing I'd ever seen her learn. It was the most important protocol she'd ever encountered... go up to a door, knock, grab candy, put it in the bag, NEXT. And then she remembered the bag the next day, when I thought she had a memory like a goldfish and nothing lasted five minutes, that Halloween bag is the first thing I ever knew that made it overnight.

Same thing this year, we kept hiding candy in the days that followed but she knew it was someplace. Then for the next two days, we'd ask what she wanted to have for dinner and she'd say "Let's just go trick-or-treat!" since it was clearly the best idea ever.

I'm trying to tell her about thanksgiving, move her along to the next big thing. She likes turkeys. She really likes putting olives on her fingers. It's one of my favorite holidays. But even I have to admit, it's second to halloween.
Collapse