Do we just look like the most perfect flying family in this picture or what? 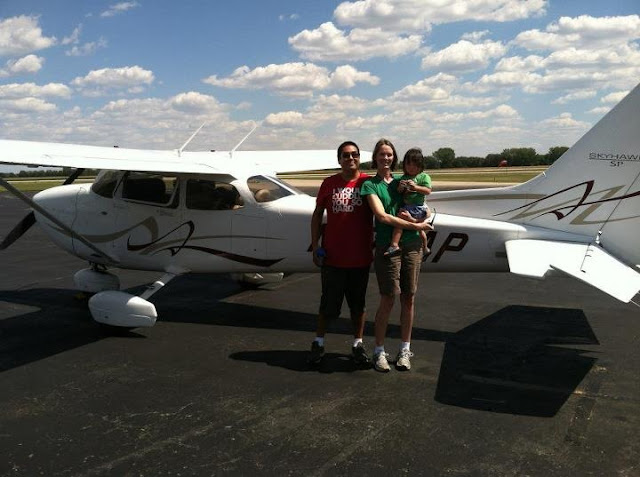 And the SKY! With the perfect fluffy clouds, like the "simpsons" intro, how beautiful is it?

We had a lazy weekend, and just to top it off I took Monday off to go see my sister, that's most of the story behind this photo. The weather has been perfect lately. Not too hot... I've been sitting on the back porch every evening with a book and a glass of wine while Josie plays with spray bottles and water and paint brushes on the rocks. Anyway my sister and brother-in-law usually have relaxed Mondays where they aren't tied up in community and work stuff, and it's an easy rent to get an airplane, so we came up for lunch. And then as crap luck would have it my brother-in-law got stuck at work, I guess he gets no days off now, but I told sis that would make it easy to decide who sits in front next time.

Stupid me didn't get a picture of HER on her first little airplane flight... daaah! And I flew too far north of Topeka on our trip around, and I don't think she got a fantastic view of the capitol, the tower at KTOP routed me too far north when we came back. Topeka has two class D airspaces butted up right next to each other on the east half and can I just say, it's a pain in the ass to deal with? Talking to one means you should avoid the other, and it's a lot of space. Next time I 'll try the south airport, I'll get a better view of washburn.

Our return trip was not as fun as flying out, it got hot and turbulent and I tried fixing it with autopilot but it was just chasing this altitude the whole time and airspeed was a mess, we were 80 knots, then 115, climbing and diving and getting knocked around some more and starting all over again.

But anyway now I can say I have a new longest cross-country trip ever, and we did make good time, left Wichita and hit Topeka an hour later. It's two hours by car.

Josie is very enthusiastic about airplanes these days. She points them out in the sky all time, and if you ask her about them she says "AIRMANE! WSSSSSH!" and zooms her hand above her head. She was happy to see the airplanes all parked at the airport, then I started the engine and she promptly fell asleep, both to and from Topeka.

Then getting out back home, we watched a regional jet pass by our little hangar and she announced "Jojo likes BIG airmanes, mama."

Oh well, at least she likes some airplanes :) Talking to fellow pilots, I hear tragic stories of kids who get tired of flying around. All of us had to reach some age & financial accomplishment to start flying ourselves, but their kids are like "Please, it's boring, and we can't get out or stop at mcdonalds." One guy said his son agreed to go up and see the Christmas lights from the air as dad's christmas present. So I'm prepared for that age someday, when josie sees no point to all of this and doesn't appreciate what she's got.
Collapse