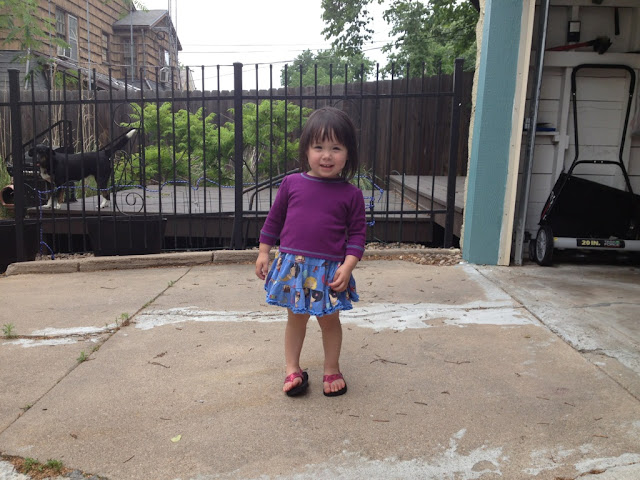 Last year we didn't have a party for her first birthday, just took her out to dinner with her grandparents and then had cupcakes at home, but this year she's actually got some little friends she pals around with and she's been to all their parties and we thought it'd be fun to throw her one. So we went to party city and let her pick out some paper plates and party favors and stuff, and invited three families over for a cookout. My parents had an early visit, Marc's parents were there and so were my sister and brother-in-law.

She helped make her cake which she just loved because she adores doing actual things in the kitchen, and I'm always looking for food ideas that involve "pouring cups of things into larger bowls" because that's really her culinary forte. She also helped decorate it... picked out pink frosting for the top and blue for the decoration icing, which her aunt put in a ziplock bag so she could mix in the color then squeeze it out on the cake. Her friends showed up and they ran around playing, we opened presents, blew out candles and kept the party going way later than I thought it would but they were having lots of fun.

The best part for me was when we all came out singing "Happy Birthday" with the cake, Josie's been SO excited about her birthday she's been singing it all week, and she suddenly realized we were all singing for her and just clung to the table beaming, taking the whole room in... I never thought about it, but at her age that's rare, she's almost never taking a whole room in. She's in constant pursuit of a new thing single thing to fixate on, her world is constantly whatever's in her hands. Then we helped blow out her candles and clapped and she got that, too, everything going on, it was really her birthday!

Later on she was trying to impress us by climbing on this box and jumping off and since we're bad parents we told her it was awesome, the other kids were older than her but it was too high a jump for them to just take on. She's a gutsy little girl. Anyway, she'd stand up on the box, look around the room, and start clapping until we all clapped, then she'd do her jump, then repeat. She had to have the crowd stirred up before she'd do anything. I've noticed that in groups of kids she can be a little solitary, kind of do her own thing, she's not the one stealing all the toys or jumping into the middle of the action, but last night she was hamming it up like crazy.

She's a good kid and fun as a two-year-old. She talks a lot, and sometimes we even understand what she's saying, especially if there's some context involved. She sings happily to herself all the time, especially in the car, she'll look out the window and we'll catch hints of the ABCs or her cuckoo clock song. She's brave and tough and strong, always freaking people out at the playground when she dangles above the slide from the bars they put up there to hold on to and stuff like that. She loves being outside, helping me water plants, going on walks, taking off clothes, dancing, trying new foods, and running laps around the house.

As usual, I'm totally freaked out by three-year-olds. Josie still has some baby qualities but in a year she'll be totally talking, putting puzzles together, talking about her day, making up stories? I see these kids and I'm like "oh hell... they're kids, I just have a toddler" they're just SO different from her. I end up looking away from kids that age now, looking back at my two-year-old, who's so good at being two and loving it so much, you know?
Collapse