Josie's talking is coming along verrry slowly. But from what I've heard that's okay! One friend who has a four year old told me, "My daughter starting talking around two years. And she hasn't stopped." He appreciates the constant running commentary of EVERYTHING, but there's no moderation with kids. It sort of reminded me of when we thought it was cute Josie could sort of take a few steps on her own, then a week later she was doing laps around the house. This also hasn't stopped. It's just gotten faster.

So anyway, words she can say reliably include: cracker, jacket, mama, daddy, Judy (more like jih-dee, which has gotten me thinking of the dog as "p-jiddy") cheese, juice, shoes, bath, done, baby, and owe. And there are some total miswords, like every cat is a "bow" because that's the sound she just randomly made up to refer to the neighbors cat, and we thought it was cute and encouraged it because we're bad parents.

She also kinda sings the ABCs along with us, or her ABC-singing frog Leap. It goes like this:

Here she is in springfield playing with gigantic lego* at the springfield discovery center. I'm kinda just letting her bangs grow, pushing them out of her face when I can, it's sort of crazy, we need better barrets because I admit she looks pretty scragly. And her "future astronaut" shirt means we're really putting high hopes on private space exploration I guess, since I have no hope in NASA still being funded in 20 years at the rate we're going. But I digress... 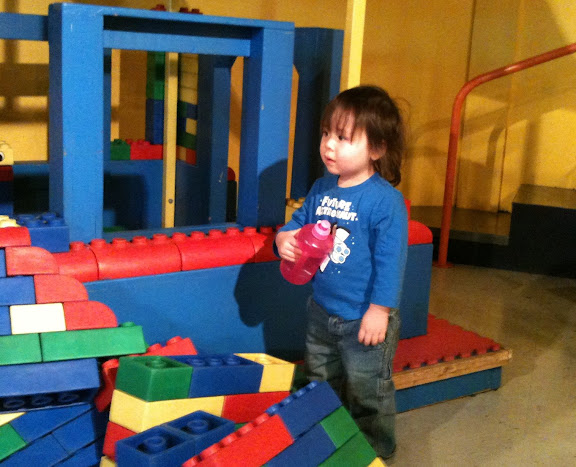 *giant lego that was SO AWESOME we rushed home to see if they were online so we could own them... we can't. I mean they are online, but at $90 for a dozen bricks, eeesh!
Collapse