So okay, I pretty much took the summer off from flying. It was 100 degrees every day for like two months! What do you want, little planes aren't air-conditioned and since I'm not working on a rating, I decided not to sweat.

But when September hit I got to thinking about it again, and like all things I had to get over my laziness a little bit so it took a while, but I'm flying again. 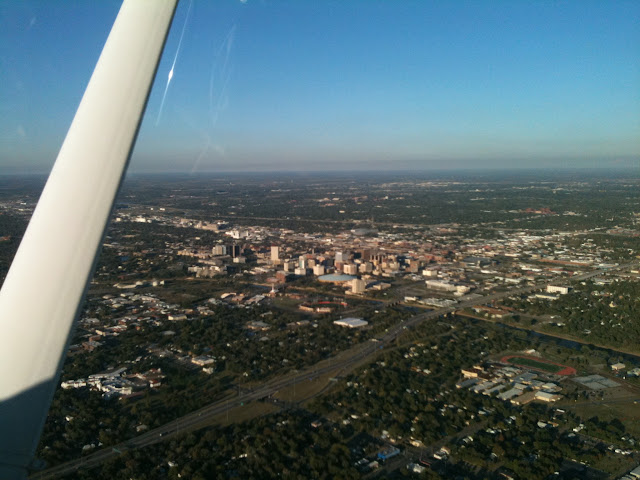 Anyway I'm current again. I went up with an instructor, we did at least three landings, he said I was doing totally fine and barely needed him, except that I did need him because my flying club requires an annual check and I hadn't had one since my checkride last March. He said to go practice on my own if I really wanted to feel sure I hadn't forgotten anything, so I did this week... a clear Monday after work this week. The METAR said there were "few clouds at 2000 feet" so I was like, damn, but I walked outside the office door and didn't see a SINGLE cloud in the sky. Once I got up, there were some wispy ones in the distance, totally easy to stay far away from. It was a lovely night. I went to a little airport and did touch-and-goes for like an hour. I still have a nasty habit of coming in way too high on an initial pattern, something I had a problem with on my student pilot days.

Driving into work this past year, I'd drive past the airport every day, and see the slope indicator lights looking at me, showing all red because I was in a car on the ground. It was a constant daily reminder... "you're too low". So seeing all four of them white on approach was bad, of course, but I was happy to see something be white. It means I'm in an airplane again, I'm a pilot again, it's a nice feeling. I want to go on adventures.
Collapse