Yesterday I helped out at the Lake Afton Astronomy Day event, they wanted to let kids design bottle rockets like we do in science olympiad, and I'm all about it.

For the first time though since this was a weekend event and marc wanted to come, we brought our own rocket: 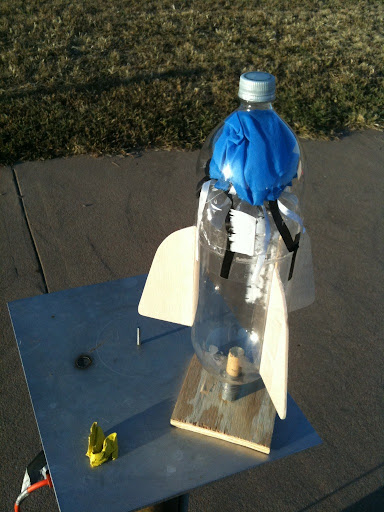 This is a pretty simple event. Kids tape stuff to the outside of a 2-liter bottle and fill it about 1/3-1/2 full of water. We have this fancy clasp/release launchpad thingy that lets us pressurize the upside-down bottle to about 70 psi, pull a pin that releases the clips, and physics does the rest! We use stopwatches to get airtime. Here's Josie, tweaking the launch pad: 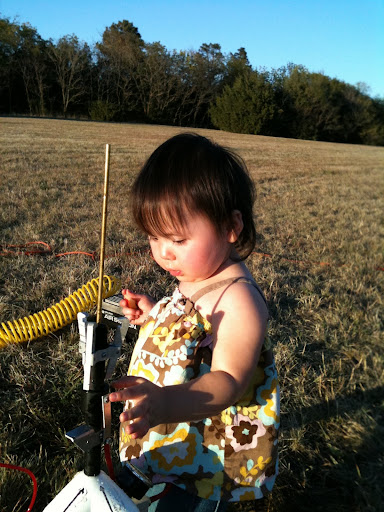 Science olympiad is a high school thing, but yesterday I learned that even itty bitty kids, like five year olds, can tape fins to a rocket. All the supplies were there and the kids didn't have to bring anything. There was "aesthetics judging" which we nicknamed the beauty contest. The winner was a little girl who's rocket had animal print duct-tape and purple glitter fins. It's also a pretty safe way to introduce kids to rockets. Since it's just pressurized water there's nothing exploding or burning you, and since we make these things out of trash you only have to worry about falling plastic bottles coming down on you, and they don't hurt much. Luckily though there was a slight wind from the south so we just set up our launchpads north of where people were and no one had to worry about falling debris. When I was a kid I remember having a little toy water rocket even, you held a launcher and hand-pumped to pressurize it, pulled a trigger and off it went. Great fun.

I was happy that even though some rockets lost some parts during launch, every one of the beauty contest participants still wanted to launch their rockets for time. They weren't too afraid of the idea of seeing their rocket flung apart. And there were lots of girls there. Yay! There was only one hugely tragic event: one rocket had a hole in the bottle and couldn't pressurize. And it happened to be the beauty contest winner. I definitely didn't like the message we were sending there... I want girls to know you can be smart AND beautiful! Like me! But what can you do? It wasn't her fault, she just happened to pick up a bad 2L bottle.

So back to our "test" rocket: Marc made the fins, I made the parachute, we debated quite a bit about the parachute packing & deployment device but finally settled on the top of another 2-liter, barely on there. And it worked! Here's video evidence:

The sound you hear about mid-way through is the air compressor on the other launchpad getting the next rocket ready. Anyway people were impressed, the other parachutes on rockets were made from trash bags at the event but since I was a "professional" on the launch "crew" mine was pre-made from ripstop nylon.