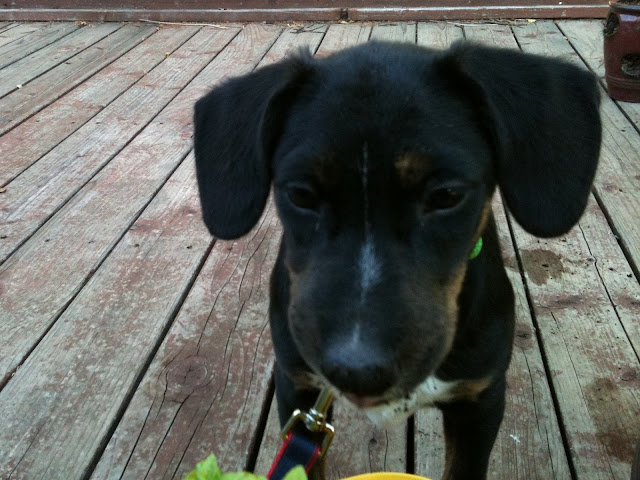 I know I said I wanted a DOG, and in a way I'm still thinking maybe I wanted a dog, but even a dog would be a little crazy in many ways right? Why not just take it to the next level and get a puppy?

What had happened was this... we went to humane society for like the third time this month, we were walking around and here's this little "dachshund mix" that looked nothing like a dachshund but I thought maybe they were just using the "mix" term a bit liberally, anyway she was cute. We asked to see her. She got cuter. The vet at humane society said she was obviously a beagle. But she seemed quiet for a beagle... she wasn't barking her head off like other dogs there, just wagging her tail. And Marc just loved her... he'd throw a toy, she'd bound after it, she'd run back to him and rest on his lap for, oh, 3 seconds, then she'd be up and bounding and tail-wagging some more.

So we have a four month old... practically a dog, right?

We haven't named her. We just call her "puppy". I don't believe in naming things until you're sure they're going to stay, remember how we called the guinea pigs GP1 and GP2 for a week? It's like that. You get to know it, then you name it.

Josie and the puppy have a mixed relationship. They're curious and amused, but also jealous and frequently just scared. We're all sort of learning about this together. I'm amazed because I never thought I'd see something in the house crazier than Josie. Seriously... compared to the puppy, Josie is librarian-calm, she calculates risks, forms plans, looks brilliant.

I felt awful for Josie that first morning because I was pouring some cereal and Josie wanted some even though she'd already had her fruit for breakfast, so I put like ten cheerios in a little plastic bowl and hand it to her. She takes it and starts walking into the living room. She was so proud, just using her best "big girl" careful feet, holding her treasured cheerios. Then she turns the corner.

And we sort of all got the same look on our faces but we all had it at the same time... "OH SHIT, PUPPY!!!" Josie was practically attacked, cheerios go everywhere, Marc yells "NO PUPPY NO!" so loud that the puppy freaks out and pees on the floor then slips on her pee trying to escape while I'm scooping up Josie, who's been knocked like three feet and is sobbing and trying to cling to her empty bowl in one hand with no idea what the hell just happened.

You know. That sort of thing.

We'll get used to each other.
Collapse