Last weekend we went to my sister's pirate party in Topeka. It's an annual tradition.

We went to this last year and it was totally my worst pirate party ever, because I spent the whole time in back rooms with a three-month-old baby who, I learned, did not like parties! The people were overwhelming, the space was too unfamiliar to sleep in, she was just irritated unless it was me & her hanging out in a quiet bedroom nursing. This was not a party to me, this was, well, normal life. Except with a party going on outside, that I was missing out on. That's why I stopped bringing the baby to parties.

At my friend's harry potter marathon a few months ago, Josie did a lot better, even seemed to have fun. She's grown into parties; there may be a lot of unfamiliar people but as long as she has us in sight she was cool. At my sister's party there were toy swords to play with, and inflatable palm-sized "cannonballs". There was a FOOD TABLE. This may be where toddlers and parties are a bad intersection, but who knows, I'm an amateur at this.

Josie couldn't reach the food table, but she could point to it and say "dith?" which isn't a word but it's a noise and she'd say it with an obvious "I'm asking for something" inflection that people understood. And there's the issue that we recently taught her to sign "please" when she's asking for something, reinforced this week by giving in on stuff a little more than we normally would, and her sign for "please" basically looks like she's rubbing her belly. So people probably thought we were starving her or something. She still looks very well-fed, she's thinned out a lot in the last few months but she's still got her big tummy and her face hasn't lost its baby roundness. Maybe that's why the crowd couldn't ignore her? 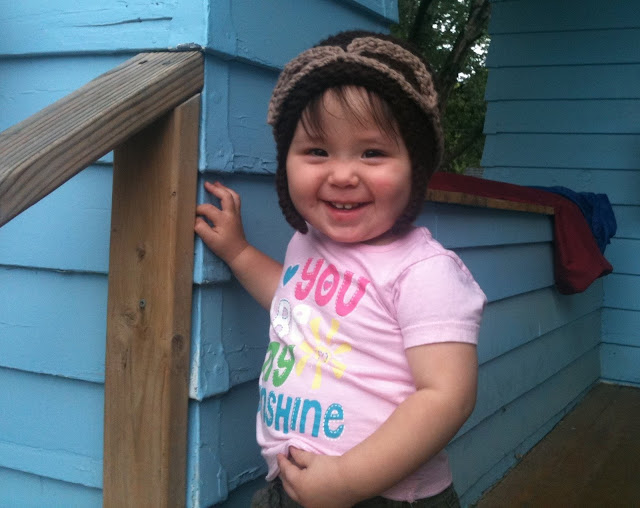 People handed her food, she'd squeel with happiness, they'd say "that's so cute!" and I think this is why she was up until ONE IN THE MORNING, totally unphased by the lack of bedtime. I tried to take her into the guestroom and get her to sleep at 10, at 11, at midnight... no avail. She just pointed at the door, like asking for more party.
At one point this guy tells my sister, "Your niece is really cute. I fed her cheese. Don't tell her mom." I don't know if it was the cheese, the pineapple, the doritos, vanilla wafers with frosting, chocolate... this kid must have had a blood sugar level that'd rival a hummingbird. Everyone at the party was amazed she was up so late, and I WAS TOO, because I didn't feel like being up that late! But Marc had a bit too much to drink and I sent him to pass out on a couch so it was all me.

When she did finally sleep she didn't sleep all that well, and wasn't in a great mood the next day, but it's hard to tell because she never really sleeps all that well, and frequently isn't in a great mood anyway this week because she might have more molars coming in but it's hard to tell, teething has been perpetual since she was four months old so who knows. But for those four or six or eight hours (who's counting at this point) she was giggly and happy so I went with it. And until I got tired, I have to admit I was having a lot of fun. It was way better than last year.
Collapse