This pose reminds me of a senior portrait, except, well, she's nine months old... 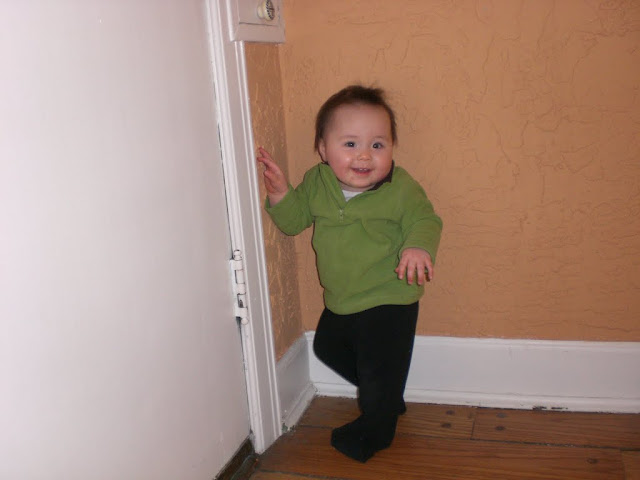 Babies are so ridiculous.

Josephine understands that "no" goes with shaking her head back and forth. We say "no", head shake. Win! But she does not understand that "no" means "stop what you're doing" or "you've done something bad". She's always got this huge smile while she's shaking her head, like she's got it.

She also thinks she knows how to answer a phone, but she holds it up to the back of her head instead of her ear. Just goes right past the ear.

She's still not walking which is totally fine with me. She crawls so well I don't know if she sees much point to walking. She's taken 3-4 steps to get between things, and she can cruise along pretty well holding onto a table or wall. We have a lightweight IKEA side table that she pushes all around the room... who needs a walker, right?

Other favorite things:
- Covering her eyes with a blanket to play peek-a-boo with us
- Diced tomatoes
- Remote controls, still
- Clapping, almost
- Opening cabinets and drawers
- Clearing bookshelves
- Dancing when she hears random music, even if it's just a commercial

Hates:
- Naps
- Bibs
- Sippy cups, apparently. Either that or it's just more fun to throw it on the floor
- Diaper changes, because she apparently has better things to do, always

Reading up on the development schedule, the next thing a 10-12 month works on is putting things "right"... stacking blocks, putting toys into containers, setting things on tables. Last week Josie put one of her rings on her ring toss thing but it might have been an accident. Generally speaking I have yet to see her put anything in a less chaotic state than she's found it. She's still the destroyer.

This book I'm reading says motor skills take a long time to wire up in the brain because they require feedback. Like, learning to interpret visual information is simple, it's all input! But grabbing and moving requires handling this information in a loop, seeing what happens if you move and arm or leg a certain way. It made me smile because airplanes also have feedback into control systems, and it's tricky to develop. We all have an autopilot system, so to speak, we gotta tweak the gains for a few years.
Collapse