Check out my neat new usericon! I decided that I DESERVED a picture of me outside an airplane, as proof that I was allowed near them if nothing else. Plus I keep seeing all these pictures of pilots smiling outside after their first solo. Just today at the flight school a student came back having just soloed for the first time, and his beaming instructor had videotaped it for him! Mine is too busy convincing me that nothing is a big deal. So I drove my man to the airport, showed him the airplanes, let him sit in one, told him about the buttons, and we took some pictures. My favorites are on my flickr.

Here's me pretending to fly. Points to anyone who can tell me what's wrong with this picture, or why I'm obviously NOT really flying. The hangar out the window doesn't count. 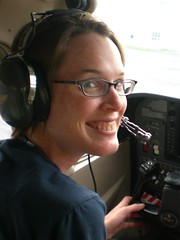 After my exciting solo experience nine days ago we returned to absolute crap weather. I went up again with my instructor last Thursday and we moved on to exciting new lessons... short field takeoffs, tracking a VOR. Yes, I get to learn to navigate now! I can fly the airplane, and now it's time to take it somewhere. I'm very excited.

My instructor skipped town, but left me with my solo endorsement, which on the surface is pretty boring. Solo means SOLO. It's the FAA's way of saying, "You're probably not in danger of damaging anyone's house by flying over it. But we're still not letting any passenger fly with you." I also have to check in with another instructor before going, and there's a laundry list of weather restrictions. The wind has to be just about lined up perfect with the runway unless it's non-existent, and waiting for the wind in Kansas to calm down and do what you want is like going to a nightclub waiting for sweatpants to be in style.

Today things went my way though. I was a little nervous, but found another instructor who'd be around with another student. He basically just made sure my normal instructor had filled things out right in my logbook, and that I had indeed read the weather correctly. Then he let me go. Yeah... first solo was "warm up with an instructor, don't leave the airport, three landings and I'm gonna stand here and watch!" Second solo was a pat on the back and a "Well have fun, you've got our cell phone numbers."

It was airplane washing day, so there were lots of people around, and I talked for a while about hanging out because they were getting pizza in a little bit. But they were all like, "We'll save you pizza, GO! Seriously! Go!" Okay, fine. Then after my preflight I see a friend of mine running up to the airplane. "You don't have to go," he said, "we didn't mean to talk you into it! If you're not ready, or need to eat, you should eat, you're pilot in command, we shouldn't pressure you..."

And I was fine. I had a boring agenda for the flight... takeoff, fly out to the practice area, do some turns. We do "ground reference maneuvers"... you fly about 1000 feet above the ground and use roads and try to hit points to make sure your can estimate what a bank and wind correction angle should be. I've been doing them since May, so no big deal. It was a beautiful day. The sky was blue, the air was clear. I was very happy. I wasn't thinking about pizza or my instructor or lack of instructor... actually it's nice to be able to throw all your stuff in that right seat! I was just really enjoying being in the air.

Then I came home and landed. The landing was nice, I was on the centerline, maybe flared a tiny bit high. With no wind I had a lot more groundspeed than I was used to. I was more than ready to go around. It's a little tricky to fly from a distant place into an airport and land, when what we usually do is fly a whole pattern and then land. If I'm flying downwind from a runway I know what 1/2 mile feels like. So a lot of times, I'll botch the first approach into a new airport and have to go around. But not today. It just came together.

I did everything by myself. Filled out my own logbook, checked the airplane back in, three-hole-punched the lesson with the checkmarks for my training log. Then sat in the hangar with the group and ate pizza and talked about flying. I know I still didn't really go anyplace. I got maybe 15 miles from my home airport. But I was feeling like a pilot, and that was really neat.
Collapse